Examples of Prejudice in History and Modern Times

Prejudice is an idea or opinion that disregards basic facts. It's akin to ignorance, or a lack of knowledge, experience or education. It's something that should not be tolerated, as we all strive for betterment and higher learning. Explore prejudice examples throughout history. 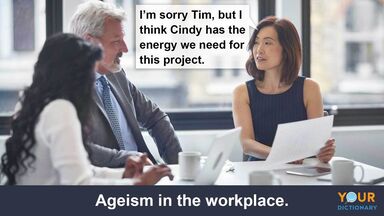 Before you can get into examples of prejudice, it’s important to examine the difference between prejudice and discrimination.

Prejudice often ends in discrimination. In essence, prejudice is a feeling and the act of discrimination is the end result. Examine various examples of prejudice so you know how to avoid it.

Prejudice is a detriment that shifts over time. Usually, prejudices are removed when someone becomes less ignorant or more informed, though, of course, that's not always the case. Here are some examples of prejudice.

When it comes to prejudice, racism is a big one. Racism is having specific notions or thoughts about a person because of their specific race. Explore examples of racism throughout history.

Another example of prejudiced thought is sexism where women are seen as inferior. Check out examples of sexism in action.

Thinking specific thoughts about the elderly being slow or not as fit as a younger individual is prejudice called ageism. See a few examples of ageism.

Ableism is the thought that people with disabilities are inferior to those with typical abilities. Check out what ableism prejudice looks like.

Prejudice in Movies and Literature

There's only one time when prejudice is beneficial. When you're trying to create conflict in a plot. Otherwise, it has no place in modern society. Alas, a good dose of prejudice creates tension between characters. You have the bigoted character on the one hand. And, you have the oppressed character on the other (who's going to rise above the challenge). It creates a certain amount of tension or conflict which, in the end, leads to resolution. Let's explore some famous examples of prejudice in our favorite movies and books.

In the movie Crash, Jean doesn't want her husband to hire a certain person because of the way he dresses. She assumes he is violent or uses drugs, but he actually turns out to be respectable.

Disney's Zootopia takes on prejudice in two forms, possibly three. The main character, Judy Hopps, is a tiny, female bunny who didn't grow up in the big city. As such, when she joins a police force dominated by large, powerful male characters (of varying animal species) who are "street smart," no one thinks she's good for anything other than a lowly position as a meter maid.

In the movie, Guess Who's Coming to Dinner, a black doctor engaged to a white woman meets her parents, and although the parents consider themselves to be liberal, they have a hard time approving this union. What makes this movie particularly poignant is that it was released a mere six months after the ban on interracial marriage was lifted in America.

In the novel Pride and Prejudice by Jane Austen, there are social class prejudices. The main example is Darcy, who didn't consider Elizabeth as a suitable wife because of her lower social status. Jane Austen wrote the first draft of Pride and Prejudice in 1793. During this time, a man who was well-educated and grew up immersed in refineries would never consider marrying a woman who grew up in a lower-income household. He'd consider her unworthy and even unable to function in his high society hemisphere.

In Nora Roberts' Guardians Trilogy, Annika Waters is a congenial mermaid simply overflowing with joy. She joins a clan of five other men and women who must defeat a dark goddess and her minions. One of the men is a seasoned warrior; the immortal Doyle McCleary is over three hundred years old. He's lived through an endless array of battles and skirmishes. As such, he thinks a pretty, bubbly mermaid has no place in battle. Turns out, Annika has moves akin to Black Widow and can kick Doyle's butt six ways to Sunday.

To Kill a Mocking Bird Example

In To Kill a Mockingbird by Harper Lee, Tom Robinson becomes a scapegoat for a crime he didn't commit simply because he's African American. He lived in a fictional town in Alabama in 1933 when racism was rampant and lynching still occurred with regularity. Since Tom was Black, the whole community assumed he possessed a greater propensity for crime. Luckily, Atticus Finch decides to defend him in an attempt to prove his innocence and overall good nature.

Prejudice thoughts are all over the world in movies and real life. As you can see, a healthy dose of prejudice can thicken a plot. But it can quickly lead to discrimination in the real world. To learn more about prejudice, be sure to check out stereotype examples as well as further examples of bias.