Principle vs. Principal: Meaning and Examples

There is often confusion about the proper use of principle and principal. They’re pronounced the same way, and they’re spelled almost the same way – but their meanings are quite different. Keep reading to learn when you should use principle and when principal is the word you actually need. 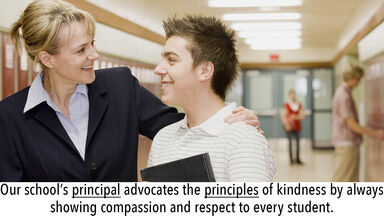 Definitions of Principle vs. Principal

Did you have a high school principal or principle? There’s only one right answer. The primary definitions for these words are:

There is only one definition for principle. However, principal can also mean:

Consider this sentence to see how many ways you can use principal:

The principal investigator spoke to the elementary school principal about the principal still owed on the school’s loans.

Notice that even though each word means something different, you would never use principle in these cases. Only use principle when discussing a core belief or guiding rule.

Principle Used in a Sentence

Even though principle only has one definition, there are lots of ways to use it creatively in a sentence! Check out these examples of principle when describing rules or basic truths.

Used in a Quote

Principles are deeply important in human history. They guide the fundamentals of government, large organizations, lifestyle choices, and religious beliefs. Here are some famous quotes that involve principles:

Principal Used in a Sentence

Your most familiar use of principal might be that bossy guy who brought you into his office as a kid. But there are lots of ways to use the word principal in a sentence! Check out these examples that use the word as both a noun and an adjective.

Used as a Noun

You can use principal in a number of ways. As a noun, it can mean the most prominent person or thing, and it can also mean the amount borrowed in a loan. Some example sentences include:

Used as an Adjective

Used in a Quote

Because it has multiple meanings, principal pops up in quotes in different ways. Some quotes that include principal from famous artists and politicians include:

Now you have seen how both principal and principle are used in sentences, you can better understand the difference between these two words. But there are lots of other words that are easy to mix up! Read a helpful article on the difference between affect and effect, or see if you can distinguish between weather and whether.