How likely is it to rain today? The probability depends on various factors, such as how often it usually rains in your area and whether rain is in the forecast. Keep reading for more real-life probability examples explained in a simple, easy-to-follow way. 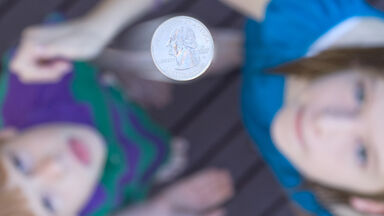 The term probability refers to the likelihood of an event occurring. You can calculate an event's probability with the following formula:

For example, if you wanted to see how likely it would be for a coin to land heads-up, you'd put it into the formula like this:

Number of ways a heads-up can occur: 1
Total number of outcomes: 2 (there are two sides to the coin)

Mathematical probability is expressed in fractions (½) and percentages (50%). Once you know the probability, you can determine the likelihood of an event, which falls along this range:

Probability is used in a number of industries, including healthcare, scientific research and weather forecasting. You may not realize it, but most of the decisions you make every day are based on probability!

No one can predict the future (yet). But probability helps us make reasonable assumptions about future events based on their likelihood. Explore some examples of probability from everyday life.

The world of sports uses statistics to predict the future when it comes to winning games. If a baseball player goes up to bat 100 times in a season and gets a hit 70 of those times, they are likely to get a hit the next time they go up to bat. Statisticians calculate a team's probability throughout the season, allowing them to make somewhat informed guesses about whether a team is likely to win a game.

Would you buy a house next to a volcano? How about one on an earthquake fault? Most people take the probability of a natural disaster into account when moving into a particular area. If a state is hit every year with a major hurricane, for example, it's likely to happen again. But when an area has never experienced a hurricane before, the probability is much lower.

Let's say you have ten pairs of socks in your sock drawer. Eight of them are yellow, and two of them are black. If you closed your eyes and picked one, there is a very likely (8/10 or 80%) chance that you're going to pick a pair of yellow socks. However, that only goes for random choices. If you really want to wear black socks, and you open your eyes, your chance of choosing black socks goes up to certain!

Winning the lottery is a dream for many hopeful people. You may know that it's unlikely to win, but what does that mean? Well, let's say that 10 million people buy lottery tickets. You have a 1/10,000,000 chance of winning — but so does everyone else! (You can slightly increase your likelihood by purchasing more tickets, but 2/10,000,000 isn't much better.)

If you were 100% certain to never get into a car accident or need healthcare coverage, you'd never need to buy insurance. But very little is 100% certain in life, especially when you're talking about the future. The insurance company rates vary by the customer; the more likely you are to need insurance, the more they charge you.

For example, teenage boys pay more for automobile insurance because they are statistically more likely to get into accidents than other populations. It doesn't mean every teenage boy will certainly get into an accident, but there have been more outcomes where they did.

As mentioned above, probability comes into play when it comes to forecasting the weather. Meteorologists study the conditions and history of an area before deciding that rain is unlikely, (0-30%), somewhat likely (30-60%), likely (60-90%), or certain (100%). The humidity of an area becomes more clear as the predicted time gets closer, so the forecasting adjusts to being as accurate as possible.

Probability isn’t just expressed using mathematical percentages. You might not even realize you are expressing probability, but you are. Check out these fun examples of probability in everyday situations.

It’s All About Probability

Probability is fun. And there are lots of different ways that you use probability every day that you might not have even realized. For more mathematical fun, you might dive into examples of quantitative data. Or, if you're interested in more statistics concepts, check out these examples of standard deviation.