Examples of Producers and Consumers in a Food Chain 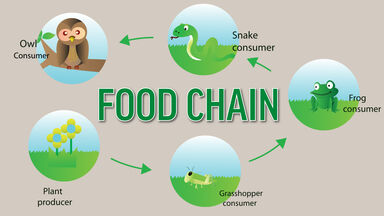 What Is a Food Chain?

What Are Producers in a Food Web?

Producer is a weird term. You might also hear it called an autotroph, which is still weird. However, if you think about what a producer is, it makes complete sense. A producer “produces” their own food. Explore how each different type of producer makes its own food.

One example of producers found in food chains include plants. They use photosynthesis to make their own food. Examples of plants include trees, grass, moss, flowers, and weeds, to name a few.

While plants are a common producer on land, in a marine setting, you might find protists as producers. Protists are microscopic, one-celled organisms that make their own food in the water. You might know them as algae. It’s yucky to swim with, but many marine creatures use it as food.

Down deep in the darkest areas of the ocean, green plants can’t live. However, a single-celled bacterium that makes its own food can. This producer uses chemosynthesis.

What Are Consumers in Science?

Now, it’s time to look at the consumers. Since producers “produce” their own food, what do you think consumers do? Well, they consume it, of course. Consumers can’t make their own food. Therefore, to get energy to be able to run the Savannah, they need to eat. And a quick example of a consumer is you! Let’s explore other different types of consumers based on trophic levels of the food chain.

When you think of primary consumers, you can think of the plant eaters. These are the animals and insects eating the plants. While mostly, but not always, these are herbivores that eat only plants like chickens and bunnies. However, you might have an omnivore thrown in there too that eats both plants and animals. Even a human can be a primary consumer if they only eat plants.

Think of secondary consumers as those that eat the plant eaters. Omnivores typically find their home in this category. Examples of secondary consumers include deer, rodents, bears, and skunks. However, you find a few different carnivores, meat-eaters, here like snakes, spiders, and seals, especially if they only hunt and eat herbivores.

When it comes to food chains, tertiary consumers are the top dogs. They typically don’t get eaten by other animals. Humans are a common tertiary consumer because they have few predators. Lions are another example of a tertiary consumer, because facing a lion is tough. Eagles and owls fit here too.

Producers and Consumers in Science

When it comes to producers and consumers, one produces its food while the other consumes it. However, since both need food for energy, they are all part of a food chain. Learn more about the circle of life by exploring biotic factors.