Examples of Psychometrics and How It's Used

The Psychometrics definition refers to psychological measurement. It relates to the design and interpretation of psychological tests that measure values such as aptitude, ability, personality, memory, happiness, and intelligence. Keep reading for psychometrics examples and the different ways they're used in mental health, education and employment settings. 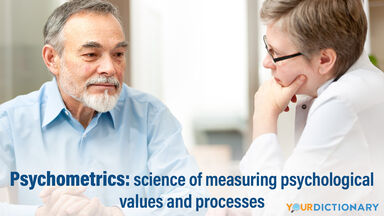 Psychometric Tests for Aptitude and Ability

Aptitude tests are a form of psychometrics that measure one's skills and abilities. They're most commonly used in the workplace, but have a use in education as well. Psychometrics for aptitude tests the following skills:

Aptitude tests can determine an employee's strengths and areas of weakness. They can also guide students down possible career paths based on their skills. Popular aptitude tests include the Modern Language Aptitude Test (MLAT), the Peabody Picture Vocabulary Test (PPVT) and the Princeton Review Career Quiz (PRCQ).

If you've ever taken a personality test, you know that they can help you understand your approach to the world a little better. This type of psychometrics test is usually based on research by psychologists such as Carl Jung or Isabel Briggs Myers.

These tests can be used to:

Memory tests are another psychometrics example. They assess the way one's memory works and locate weaknesses or strengths.

They can be used for a variety of reasons, including:

Depending on the reason for a memory test, there are many options to choose from. Some common memory tests include the Wisconsin Card Sorting Test (WCST), the Rivermead Behavioural Memory Test (RBMT-3) and the California Verbal Learning Test (CVLT-II).

Psychometric tests can also measure psychological traits, feelings or other characteristics. These traits are known as mental health assessments and could suggest various forms of mental illness, depression or increased anxiety.

They can perform the following functions:

Depending on the results of the psychological evaluation, the individual can seek help in the appropriate way. Common psychometrics examples for mental health include the Autism Diagnostic Interview (ADI-R), the Beck Depression Inventory (BDI-II) and the Behavioural Assessment of the Dysexecutive Syndrome (BADS)

There is also a place for psychometrics tests that assess psychological traits in the employment sector. They include:

You'll see psychometrics examples in the educational world as well:

Knowing Yourself Better With Psychometrics

Unlike opinions, psychometrics provides a way to measure how a person's personality could affect their ability to succeed in various situations. Now you have seen examples of different types of psychometrics tests commonly used in the real world. When you're ready for more information about what psychometrics measures, check out these examples of cognitive psychology.