Examples of Race and Ethnicity

While race and ethnicity can get confusing, these two terms have some unique differences between them. Get a simple definition of these two terms and examples of each. Dive into how these words are based on social structures rather than scientific ones. 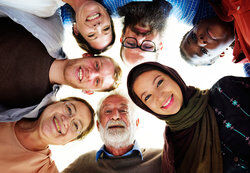 Examples of Race and Ethnicity
Advertisement

You may have needed to fill out a census form or application and mark your race. But, what is race really?

Race or racial identity simply describes the physical features that a group of persons might have in common. This can include but aren't limited to:

Racial identity can vary based on your global location. For instance, a person may consider themselves black or African American in America, but they may view themselves as a different racial category in a different country, depending on that country's racial constructs.

While racial identity is variable when it comes to governments, it is typically broken down by biological region of origin or skin color. A few examples of racial identifiers or categories include:

While these categories can be broken up by descent, they can also be broken down by physical characteristics as well. For example, a person who identifies as "white" might do so based on skin color regardless of ancestral history.

A Look at Ethnicity

While people might choose to define themselves based on their race, they can also use their ethnicity.

Unlike race, which is based largely on physical attributes, your ethnicity is based on traditions, language, nationality or cultural heritage. When you think of your ethnicity, you look beyond your physical characteristics to traits that you share with the culture around you.

While race might be derived from the color of your skin, ethnicity takes into account your cultural construct. For example, you might have a German ethnicity because your great-grandmother or grandfather came from Germany, you speak the language, and you follow German cultural traditions.

While Hispanic and Latino are often grouped together when it comes to cultural identity, these two ethnic groups hold distinctions. These distincts are regional and linguistic.

Someone who identifies as Hispanic may descend from Spanish-speaking countries like Mexico. On the other hand, those who identify as Latino might come from Latin American countries. Brazil is a prime example. The official language of Brazil is Portuguese, so someone from there may identify as Latino/Latina but not necessarily as Hispanic. People might consider themselves both Latino and Hispanic, depending on their descendants.

Indigenous peoples are a large subgroup that might consider themselves first peoples, aboriginal or natives of the area. This group can be broken down into several subgroups and tribes all over the globe. These groups are each classified by their own languages and unique tribal traditions and religions.

For example, those native to the Americas might classify themselves as Cherokee, Iroquois, Navajo, Sioux, or Cheyenne, among several others. Other examples around the world include the Sami indigenous to Nordic countries, the Kurds indigenous to the Middle East, and the Tamil indigenous to Sri Lanka.

Ethnicity isn't a one type fits all people. Within each ethnicity, you can find several different sub-groups. For example, someone who is Japanese but raised in America could consider their ethnicity as Japanese-American because they align with cultural traditions of both groups.

The Confusing World of Race and Ethnicity

According to White House research, there is no genetic basis in race. It was found that all humans are closely related with the same gene collection. The versions of those same genes are what create specific features like darker skin or blue eyes. The genes that you get from your parents determine your physical attributes. How you are raised contributes to your traditions and culture. However, each human is genetically the same as the person standing next to them.

Wading through the murky waters of ethnicity and race and what constitutes each can get confusing. However, if you remember that race is based on physical attributes while ethnicity is based on cultural attributes, things can become more clear. Expand your cultural mind further by exploring cultural diffusion.