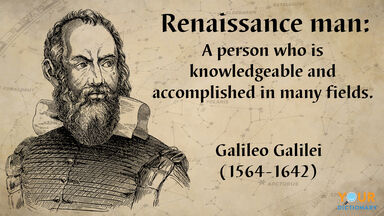 Renaissance Men and Women in History

So, what is a Renaissance man (or woman)? The term “Renaissance man” comes from the philosophy of the Italian Renaissance, which values education, knowledge and one’s personal development. However, there were plenty of multi-talented scholars long before — and after — the Renaissance period.

Before the Renaissance began in the 14th century, the Greek concept of polymath (“having learned much”) described people who have extensive knowledge in varied subjects. These historical figures ranged from ancient Greece and Rome to the Middle Ages.

Famous historical polymaths who lived before the Renaissance include:

Historians consider Leonardo da Vinci to be the original Renaissance man due to his success in so many different fields and embrace of the Humanist movement. However, there are many prominent scholars during this time period who could also be considered Renaissance men.

Take a look at these men and women who were accomplishing great things in Europe during the Renaissance:

The influence of the European Renaissance persisted long after it ended. The accomplishments of the Renaissance led to the scientific Age of Enlightenment and many scholarly achievements around the world.

Check out examples of Renaissance men and women who were influenced by the legacy of the Renaissance:

The accomplishments of the polymaths and Renaissance men and women have led to a flourishing modern age. However, there are still many of these geniuses in our modern world!

Examples of modern-day Renaissance women and men include:

Geniuses in the Past and Present

Chances are, the innovations you enjoy every day came from the time of a talented Renaissance woman or man. These polymaths are different from your everyday geniuses — they flourish in many fields, always working to make our world a better place. To learn more about the inventions that turn the world around, check out these Industrial Revolution inventions that made history.