Renewable resources are defined as materials that can be replenished over a reasonably short time through natural processes. Renewable resources afford people the opportunity to be self-sustaining through individual efforts. Perhaps, one day, people won't need to rely on major oil companies to propel cars down to the grocery store. Until then, review this list of notable renewable resources examples. 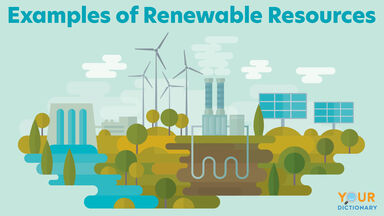 Alcohol, particularly ethanol, is derived from glucose. More specifically, alcohol is primarily derived from the starch in corn kernels. It can also be harvested from sugar cane, wheat straw and switchgrass, among other sources.

Through photosynthesis, glucose is synthesized from carbon dioxide and water to make ethanol. This colorless fluid has several uses, but one of the most well-known is powering cars. It's a renewable resource because the energy from the sun, captured during photosynthesis, produces energy when combusted. In the right amount, and often blended with other fuels, this is enough to power a motor vehicle. This is one form of biofuel.

Methane is an example of natural gas. It's always present in the air. Anytime a person inhales, the individual is breathing in a small percentage of methane. It's derived from greenhouse emissions, livestock and other natural sources such as wetlands. When compared to its non-renewable counterparts, like coal or petroleum, methane burns very cleanly.

This means that methane produces fewer pollutants and toxic air contaminants than other energy sources used for the same purposes. As such, methane can be used for cooking (as you might see in a gas stove), heating water in hot water heaters, heating entire homes, and powering generators.

Geothermal energy refers to capturing the heat trapped within the Earth's surface and converting it to usable energy. It's a renewable resource because it's constantly being produced inside the Earth. Geothermal heat pumps can heat and cool buildings and water, as well as generate electricity using steam.

Geothermal energy can be used to power entire plants to engineer a host of goods for human consumption. The most common application of geothermal energy involves pumping cool water deep into the Earth. The water is naturally heated, the hot water is pumped back up to the surface, and the resulting steam is used to power turbines and other generators to produce electricity.

Geothermal energy is highly predictable and stable, making it a fan favorite in power plants. It facilitates energy planning with a high level of accuracy. It is also useful on a smaller scale as a source of renewable energy for smaller buildings, like homes in rural areas.

Water is considered a renewable resource. Generally speaking, it doesn't get destroyed as we use it, and it is replaced by rain. Water can be used as hydropower. That is, extensive amounts of natural water can be stored in dams and flowing rivers to generate electricity in hydro-powered plants. A dam manipulates the flow of water. The flowing water drives turbines, causing the water to create mechanical energy that is used to generate electricity. Until 2019, hydroelectricity was the largest renewable energy source according to the U.S. Energy Information Administration.

Ocean energy is a great renewable energy source. Oceans are a prominent feature on Earth. In fact, most of the world is covered with oceans. Since the waves are always moving, it’s possible to capture and use this mechanical energy. Additionally, the uneven heating of the ocean from the sun creates thermal energy. Barrages (dams), channels and floating systems can be used to harness this energy.

Perhaps the most popular example of a renewable resource is solar power. The sun is always shining, so solar energy will always be available. As a result, it is one of the most abundant sources of renewable energy. Special panels collect solar energy that produces heat or thermal energy, which can heat houses and provide electricity. It can also be used to warm pool water and heat fluids in power plants. The amount of heat energy available varies based on weather conditions.

Windmill farms are becoming more popular. In some areas, these large fields of endless windmills can go on for hundreds of miles. Because wind patterns can be predictable, the strategic placement of windmills makes it possible for power companies to harness the power of the wind to generate electricity. While a family might use a wind turbine for electricity in their home, large electric companies create windmill farms to light up a whole city or state, reducing the need for coal and other non-renewable sources of energy.

Vegetable oil to power a car, sounds ridiculous, right? Well, vegetable oil and animal fats are one of the main components of biodiesel fuel. It’s a fuel alternative that can be used in all different types of vehicles and equipment. It's even possible to make your own biodiesel at home.

Landfills and sewage treatment plants are alive with anaerobic bacteria. These decomposers are working hard to naturally break down waste. Filling their bellies creates a byproduct composed of methane and carbon dioxide. This biogas is used to generate electricity. In fact, Iowa and Wisconsin dairy farmers use animal waste in this way.

Hydrogen is one of the simplest elements and most abundant atoms found on the planet. It is also one of the basic elements found in water. When it’s separated from other elements, its energy fuels rockets and powers cars. There are a number of advantages of hydrogen fuel. However, the process of separating hydrogen from other elements is expensive and time-consuming.

Trees can be harvested and planted by humans, or they can naturally reproduce as they drop seedlings and germinate on their own. Trees produce oxygen, which is needed to breathe. Trees are a renewable resource that can be used as an energy source. Not only do trees produce oxygen and absorb carbon dioxide, both of which are necessary for people and animals to survive, but the wood from trees can also be burned to make heat. Wood heat can be used for warmth or to cook food.

Now that you've reviewed this renewable resources list, it should be easy to understand that renewable resources can be replaced naturally. While these renewable resources examples should theoretically never run out, that could happen with some of them. It is up to humans to protect the planet and conserve its resources for the future. With the right care and protection, we can go on to grow bumper crops of potatoes and never cease to rely on hydropower.

Does all this make you wonder which of our resources are not renewable? Some of the big ones are coal, diesel and petroleum (gas). This lends itself to the increased focus on finding biodiesel, biogas and bioplastic alternatives that are more sustainable and less harmful to the environment. Read some examples of non-renewable resources that just may have to be replaced before they run out.