Examples of Reserved Powers Under the 10th Amendment

The 10th Amendment to the United States Constitution is the last one included in the Bill of Rights. Ratified in 1791, the 10th Amendment outlines all the reserved powers of individual states or the people. 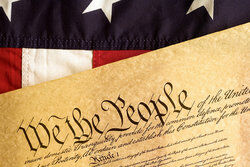 American flag and Declaration of Independence

The Tenth Amendment is titled “Rights Reserved to States or People.” It does not include a list of reserved powers. It includes only one sentence that reads:

“The powers not delegated to the United States by the Constitution, nor prohibited by it to the States, are reserved to the States respectively, or to the people.”

In simple terms, the reserved powers amendment solidifies that the new government is limited to the specific powers outlined in the Constitution. Some of the Constitution's framers felt a Bill of Rights was unnecessary and even dangerous, so experts argue this amendment was meant to address that concern.

Examples of Reserved Powers in Use

In 1871, Judge J. M. Day questioned whether Congress had the power to tax states and state officials. The U.S. Supreme Court sided with Day that this was one of the reserved powers of the states. However, in 1939, the decision was overruled.

Textile worker Roland Dagenhart took his case to the Supreme Court arguing against the Keating-Owen Act of 1916 which prohibited shipment of goods manufactured by children across state lines. Dagenhart argued this was unconstitutional as it was a reserved right of the states to make their own child labor laws.

The court sided with Dagenhart, saying that the states did have the right to make their own child labor laws. This decision was later overturned in 1941.

The National Industrial Recovery Act (NIRA) of 1933 was deemed unconstitutional and the Supreme Court ruled that it violated the Tenth Amendment. This is because the issues raised were about intrastate sale of poultry.

Any powers outlined as reserved for Congress, the President, or any other part of the federal government are reserved, or saved, only for those people. Anything that is reserved is defined as being saved for a specific person or a specific purpose.

Reserving any unnamed powers for states in the Tenth Amendment ensures that states have the power to make decisions and take actions for things that are not regulated by the U.S. federal government.

There are a few different types of powers covered by the U.S. Constitution.

The Power of the States

While it can be difficult to define what the reserved powers designated by the Tenth Amendment are, examples can help you see some of the issues they pertain to. Take a look at some examples of the separation of powers in the U.S. government, such as judicial powers, and see if you can figure out any powers reserved for the states or the people. Next, discover state and local government powers. Then you can explore the powers specific to the national government.