Examples of Rhetoric Across Media and Their Types

Have you ever been talked into something — but you have no idea why you changed your mind? Chances are, rhetorical tools were at work. Rhetorical language informs, persuades or motivates audiences by appealing to emotions, as well as shared values or logic. You'll find examples of rhetoric in literature, politics and advertising, all designed to form (or change) an audience's opinion. 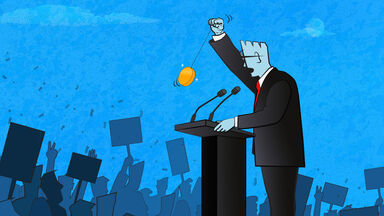 Speech of Politician with shiny object as Examples of Rhetoric
Advertisement

Examples of Rhetoric in Literature

Great writing isn't just about beautiful language and well-formed characters (although those are important too). Writers who are considered to be great use rhetorical language throughout their novels to convince their audience to support a character, trick readers into believing in an outcome (known as a red herring) or make a larger point about the world around us.

A Modest Proposal by Jonathan Swift

Irish satirist Jonathan Swift's A Modest Proposal uses rhetorical exaggeration to suggest that people begin eating poor children for meat. It's a wickedly cruel idea that pits the audience against the author — and accordingly, against the Irish government, whose heartless treatment of the poor is the target of Swift's writing.

"I am assured by a very knowing American of my acquaintance in London; that a young healthy child, well nursed, is, at a year old, a most delicious, nourishing, and wholesome food; whether stewed, roasted, baked or boiled, and I make no doubt, that it will equally serve in a fricassee, or ragout."

Way on the other side of the rhetorical spectrum is litotes, Greek for "simple." It's a deliberate, ironic understatement used by a writer to portray modesty and to gain favor with the audience. J.D. Salinger uses litotes throughout The Catcher in the Rye as Holden Caulfield constantly downplays his situation (or the situation he perceives).

"It isn't very serious. I have this tiny little tumor on the brain."

Charles Dickens uses parallelism to stress contradictory notions about society in A Tale of Two Cities. The repetition of parallel sentence structure forces the reader to more deeply contemplate the time period that is being described.

"What happens to a dream deferred?
Does it dry up like a raisin in the sun?
Or fester like a sore —
And then run?
Does it stink like rotten meat?
Or crust and sugar over —
like a syrupy sweet?

Maybe it just sags like a heavy load.
Or does it explode?"

From its beginnings in Greek democracy, public debate has always employed rhetoric to sway an audience's stance. The most inspiring political speeches in history are full of rhetoric — as are the most notorious.

I Have a Dream by Martin Luther King

Dr. Martin Luther King, Jr.'s sweeping rhetoric in his 1963 speech "I Have a Dream" appears in nearly every statement. He uses metaphor, repetition and allusion to appeal to his audience's sense of pathos — their emotions.

Passion doesn't have to be centered on pathos to be convincing. In Steve Jobs' 2005 commencement address at Stanford University, his position as a technological and business innovator is an appeal to ethos. The audience is ready to believe him because his success is evidence enough of his argument.

"You can’t connect the dots looking forward; you can only connect them looking backward. So you have to trust that the dots will somehow connect in your future. You have to trust in something — your gut, destiny, life, karma, whatever. This approach has never let me down, and it has made all the difference in my life."

On Women's Right to Vote by Susan B. Anthony

Speakers can use logic to sway an audience as well. Known as an appeal to logos, this rhetorical tactic allows listeners to put the facts together and decide for themselves — which is exactly what the speaker intends for them to do. In Susan B. Anthony's 1872 "On Women's Right to Vote" speech, she points out that women are people, and people are allowed to vote; therefore, women should be allowed to vote.

"It was we, the people; not we, the white male citizens; nor yet we, the male citizens; but we, the whole people, who formed the Union. And we formed it, not to give the blessings of liberty, but to secure them; not to the half of ourselves and the half of our posterity, but to the whole people - women as well as men. And it is a downright mockery to talk to women of their enjoyment of the blessings of liberty while they are denied the use of the only means of securing them provided by this democratic-republican government - the ballot."

When Theodore Roosevelt was re-elected U.S. president, the country was coming into its own power at the turn of the century. The new president used this perspective in his rhetorical use of hyperbole during the 1905 inaugural address.

"The conditions which have told for our marvelous material well-being, which have developed to a very high degree our energy, self-reliance, and individual initiative, have also brought the care and anxiety inseparable from the accumulation of great wealth in industrial centers. Upon the success of our experiment much depends, not only as regards our own welfare, but as regards the welfare of mankind. If we fail, the cause of free self-government throughout the world will rock to its foundations, and therefore our responsibility is heavy, to ourselves, to the world as it is to-day, and to the generations yet unborn."

Examples of Rhetoric in Advertising

The Worse You Feel, the Better It Works

An ad for medicine may first address the illness or malady that affects the company's customers in dramatic terms (pathos). It may also claim that more people choose its medicine than a competitor, but this is a logical fallacy — the fact that more people purchased the medicine does not speak to its effectiveness and worthiness of purchase.

Moms Who Love Their Children

Every mom loves their kids — so don't you want the best for them? Advertisement for a food product for children may espouse that "Moms who love their children, buy [name of product]." These ads use rhetoric by persuading parents that not buying that brand of product may imply they do not care as much for their children as other parents.

We Support You More Than the Other Guys

Customers want to feel like they're getting the best deal around. Many companies, including insurance companies, use rhetoric to make it seem that the buyer would receive less service or support for damage from other insurers. The customer believes that it's in their best interest to buy the insurance — in fact, it would be irresponsible not to.

Even Picky Kids Love Us

Advertisers love targeting moms. An advertisement for canned soup may show a child smiling and eagerly eating their soup after pushing away another brand. The customer (a mother, probably with a picky eater) infers that even picky eaters will enjoy this meal, and will try anything to get her child to eat.

Rhetorical Tools Are Powerful — So Be Aware

Studying rhetoric isn't just an interesting reading exercise. Knowing how others use these powers of persuasion can keep readers, voters and customers from making decisions that aren't in their best interests. Study up on rhetorical tools with these additional resources: