A rhetorical device uses words in a certain way to convey meaning or persuade readers. It appeals to an audience's emotions, sense of logic or perception of authority. Keep reading for a list of rhetorical devices examples that writers use in their work to achieve specific effects. 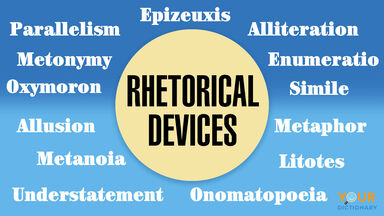 What Are Rhetorical Devices?

The concept of rhetoric, which can be defined as the art of persuasive writing or speaking, dates back to ancient Greece with Aristotle's Rhetoric. In addition to being effective argument tools, some types of rhetorical devices can be considered figurative language because they depend on a non-literal usage of certain words or phrases. Take a look at some common and not-so-common rhetorical device examples that can be used to great effect in your writing.

Alliteration refers to the recurrence of initial consonant sounds. The phrase "baby buggy bumpers" is one example of alliteration. Alliteration is often associated with tongue twisters for kids, but brand names commonly use this technique too, such as Best Buy and Krispy Kreme.

Allusion is a reference to an event, place or person. An example of allusion would be "I can’t get changed that quickly, I’m not Superman!” Alluding to something well-known allows the writer to make a point without elaborating in great detail.

Amplification repeats a word or expression for emphasis, often using additional adjectives to clarify the meaning. "Love, real love, takes time" is an example of amplification because the author is using the phrase "real love" to distinguish his feelings from a love that is mere infatuation.

An analogy explains one thing in terms of another to highlight the ways in which they are alike. “He’s as flaky as a snowstorm" would be one example of an analogy. Analogies that are very well known sometimes fall into the categories of idioms or figures of speech.

Anaphora repeats a word or phrase in successive phrases. "If you prick us, do we not bleed? If you tickle us, do we not laugh?” is an example of anaphora from Shakespeare's Merchant of Venice. The use of anaphora creates parallelism and rhythm, which is why this technique is often associated with music and poetry. However, any form of written work can benefit from this rhetorical device.

Anastrophe is a sentence that puts one or two words out of order for effect. Think of the character Yoda from the Star Wars movies, who often speaks in anastrophe (for example, "Judge me by my size, do you?" instead of "Do you judge me by my size?"). Moving more of the sentence around is called hyperbaton.

Antanagoge places a critical statement and a compliment together to lessen the impact. "The car is not pretty, but it runs great" would be one example, because you're referring to the vehicle's good performance as a reason to excuse its unattractive appearance.

Antiphrasis uses a word with an opposite meaning for ironic or humorous effect. "We named our chihuahua Goliath" is an example because a chihuahua is a very small dog and Goliath is a giant warrior from the famous Bible story.

Antithesis makes a connection between two things. An example of antithesis would be the Neil Armstrong quote, “That's one small step for a man, one giant leap for mankind." This pairs the idea of one man's individual action with the greater implication for humanity as a whole.

Enumeratio makes a point with details. For example, saying ”The hotel renovation, including a new spa, tennis court, pool, and lounge, is finally complete" uses specific details to describe how large the renovation was.

Epanalepsis repeats something from the beginning of a clause or sentence at the end. Consider the Walmart slogan as an example of epanalepsis, "Always Low Prices. Always." The repeated words act as bookends, driving the point home.

An epithet is a descriptive word or phrase expressing a quality of the person or thing, such as calling King Richard I “Richard the Lionheart.” Contemporary examples of epithets often denote an abusive or derogatory term describing race, gender, sexual orientation, or other characteristics of a minority group.

Epizeuxis repeats one word for emphasis. A child who says, "The amusement park was fun, fun, fun" is using epizeuxis to convey what a wonderful time he had at the park.

Hyperbole refers to an exaggeration. Saying "I have done this a thousand times" to indicate that you're very familiar with a task is an example of hyperbole because it is unlikely you've really performed the task a thousand times.

Litotes make an understatement by using a negative to emphasize a positive. In examples of litotes, a double negative is often used for effect. So saying someone is "not a bad singer" actually means you enjoyed hearing them sing.

Metanoia corrects or qualifies a statement. "You are the most beautiful woman in this town; nay, the entire world" is an example of metanoia because the speaker is further clarifying the extent of the woman's beauty.

A metaphor is a type of implied comparison that compares two things by stating one is the other. An example of a metaphor would be "Your eyes are the windows of your soul," which means you “see" someone's emotional state by looking into their expressive eyes — eyes are not literally windows.

Metonymy is a type of metaphor where something being compared is referred to by something closely associated with it. An example of metonymy would be when writers often refer to the "power of the pen" to convey the idea that the written word can inspire, educate and inform. A pen has no power as an inanimate object, but the writer's words can reach a broad audience.

Onomatopoeia refers to words that imitate the sound they describe. Examples of onomatopoeia are “plunk,” “whiz” or “pop.” This type of figurative language is often used in poetry because it conveys specific images to the reader based on universal experiences. We are all familiar with the “squeal" of tires as a vehicle stops abruptly or the “jingle” of car keys in your pocket.

An oxymoron creates a two-word paradox. "Near miss" or "seriously funny" are examples of oxymorons. An oxymoron is sometimes called a contradiction in terms and is most often used for dramatic effect.

Parallelism uses words or phrases with a similar structure. "Like father, like son" is an example of parallelism in a popular phrase. This technique creates symmetry and balance in your writing.

A simile directly compares one object to another using "like" or "as." "He smokes like a chimney" is one example of a simile. Similes are often confused with metaphors, but metaphors do not use "like" or "as" in their comparisons.

An understatement makes an idea less important than it really is. "The hurricane disrupted traffic a little" would be an example of an understatement because hurricanes cause millions of dollars in damage and can lead to injuries or fatalities.

Different rhetorical device examples create more interesting or persuasive content. Once you know how to use them effectively, your readers will be more likely to listen to the point you're making. For more practice with rhetorical devices, check out these persuasive writing examples. You can also learn more about convincing an audience with examples of ethos, logos and pathos.