Examples of Rhyme and Its Many Types

A rhyme occurs when two or more words have similar sounds. Typically, this happens at the end of the words, but this isn't always the case. Review several of the many types of rhymes along with rhyme examples for each type. 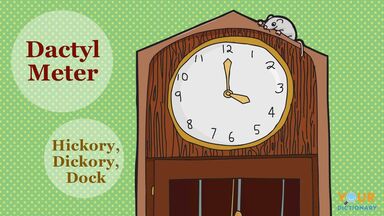 Poetry is a beautiful form of expression. Just as there are numerous kinds of poetry, there are also many types of rhymes.

Assonance involves using repeated vowel sounds in words that are close to each other. It is sometimes referred to as a slant rhyme. There are many examples of assonance in poetry. This technique is also common in literature and prose. The following word combinations illustrate assonance.

Consonance involves repeating consonant sounds in words that are close together. There are many examples of consonance, including:

Eye rhyme is based on spelling and not sound. It refers to words with similar spellings that look as if they would rhyme when spoken, yet are not pronounced in a way that actually rhymes. Example of eye rhyme word pairs include:

Feminine rhyme occurs when a word has two or more syllables that rhyme with each other. This type of rhyme is also referred to as double, triple, multiple, extra-syllable, or extended rhyme. Examples of feminine rhyme word pairs include:

Also called alliteration or initial rhyme, head rhyme has the same initial consonant at the beginning of the words. There are many examples of alliteration in poems. Head rhyme is also common in literature. Word pairs that illustrate head rhyme include:

Identical rhyme is rhyming a word with itself by using the exact same word in the rhyming position. In some cases, the repeated word refers to a different meaning. For example:

Another example is the way the word ground is used in Emily Dickinson's "Because I Could not Stop for Death."

"We paused before a House that seemed
A Swelling of the Ground —
The Roof was scarcely visible —
The Cornice — in the Ground."

With internal rhyme, rhyming occurs within lines of poetry. Sometimes the rhyming happens within a single line of poetry, but not always.

With light rhyme, one syllable is stressed and another is not. Examples include:

Near rhyme goes by several different names. This type of rhyme is also referred to as half, approximate, off, oblique, semi, or slant rhyme. It rhymes the final consonants of words, but not the vowels or initial consonants. Because the sounds do not exactly match, this type of rhyme is considered an imperfect rhyme. Examples include:

Sometimes called exact, full or true, a perfect rhyme is the typical rhyme where the ending sounds match exactly. Examples include:

Rich rhymes involve words that are pronounced the same but are not spelled alike and have different meanings. In other words, rich rhymes feature terms that are homonyms. Examples include:

Scarce rhyme is a type of imperfect rhyme used for words that have very few other words that rhyme with them. For example, not a lot of words sound like different.

Wrenched rhyme is an imperfect rhyme pattern. It rhymes a stressed with an unstressed syllable.

The different types of rhymes can be used in all types of poems and prose. Many include more than one type. Be on the lookout for different rhyme scheme examples in poems.

Now that you know about many different types of rhymes, take a deeper dive into literary devices commonly used in poetry. Start by discovering the various sound devices used in poetry. From there, explore alliteration vs. assonance vs. consonance in poetry to expand your knowledge.