In poetry, a couplet is a pair of lines in a verse. Typically, they rhyme and have the same meter or rhythm. They make up a unit or complete thought. Expand your poetic mind through a definition of rhyming couplets and rhyming couplet examples. 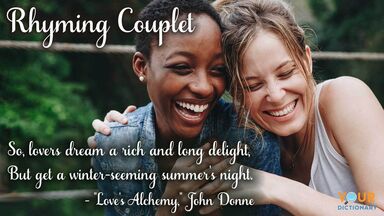 What Is a Rhyming Couplet?

You'll notice that the two lines of poetry are similar in length. Both have six syllables and the words tense and sense rhyme. Well, that is a rhyming couplet at play. Explore this poetic device more through several rhyming couplet examples.

Dive into these short little rhyming couplets. Some are even part of nursery rhymes. Try to count the syllables for each one and see if they match up!

Rhyming couplets don't just stand alone. They can be part of large famous works like those from literary wordsmiths such as Pope and Dryden. Explore a few classic couplet examples created by poetry masters.

One of the greatest wordsmiths of all time, William Shakespeare, who's actually credited with creating English words, also liked to add a couplet or two to his writing. Explore some of the great couplets found in Shakespeare's famous plays and poems.

The Reason for These Rhymes

Now you can see how rhyming couplets work. Thanks to their short and succinct form, they are a good way to produce a startling or dramatic effect in a poem or provide a sense of completion to the piece. For more on the use of couplets, see famous couplet examples.