50+ Clever Riddles: Examples & Types for Everyone (With Answers)

A riddle is a statement, question or phrase that has a double meaning. When someone uses a riddle, it can be a thought-provoking challenge to figure it out on your own, or it can be a funny comment that makes you laugh. They require critical thinking — and a sense of humor — to solve correctly. Keep reading for examples of riddles for kids, adults and anyone who loves solving puzzles! 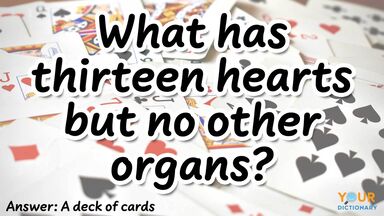 riddle what has thirteen hearts but no other organs
Advertisement

Riddles for kids are a great way to practice communication skills. They are a bit more complex than jokes but are less complicated than analogies. Examples of simple riddles for kids (and their solutions) include:

If those riddles were a little easy, check out these difficult examples of riddles! Try them out on your friends and see if they can guess the answers.

If you're looking for the perfect tricky riddle to stump your friends, you may find it here. Check out these riddles that take an extra few moments to solve.

A riddle is a statement, question or phrase that has a double meaning. A riddle can also be described as a puzzle to be solved. There are two types of riddles: enigmas and conundra.

A riddle, however, doesn’t need to be classified as one of these types. As long as it is difficult to figure out and has an answer or a meaning to it, it can be classified as a riddle. Today, riddles aren’t used as much as they were in ancient times, but they remain a definite way to get your mind working.

Riddles can be great brain busters or conversation starters to get you to think. The answer can be right in front of your nose and even in the riddle itself, or it can be difficult and hard to comprehend. For more practice with word puzzles, check out these examples of rebus puzzles.