Have you ever noticed that many words contain "act" or "form," such as action, activity, conform, or information? Well, that's because those are root words. Get a clear definition of what a root word is, along with several root word examples you can find in the English language. 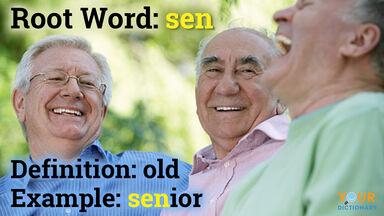 What Is a Root Word?

A root word is a word or word part that forms the basis of new words through the addition of prefixes and suffixes. In traditional root words, these words come from Latin and Greek, and typically do not stand alone as a complete word. Understanding the meanings of common roots can help you work out the meanings of new words as you encounter them.

Many of the words we use in our daily language come from a root word. Once you pull off any prefixes or suffixes, the root is usually what remains. For example, “egotist” has a root word of “ego” plus the suffix -ist. “Acting” has the root word “act” and -ing is merely the suffix.

While traditional root words come from Greek and Latin, you might also see discussion of modern roots in English. A root is a complete word that you can't break down any further. For example, if you start with the word uncomfortable and remove the prefix un- and the suffix -able, you would be left with the root of "comfort." While this isn't a Greek or Latin root word, it is the furthest that the word can be broken down.

Now that you know the difference between traditional root words and modern roots, check out several examples of root words along with a few of the words formed from them.

Root Words That Can Stand Alone

Since much of the English language is derived from Latin and Greek, there may be times when the root of a word isn’t immediately recognizable because of its origin. You’ll find that the roots listed are from Greek or Latin and can't stand alone in English; they need something joined to them to make a whole word in English. Review the list, as well as a few examples of English words that are based on these roots.

You could argue that roots like “sent” and “sect” can also stand alone as English words, but they have different meanings in that case. For more examples, explore these Greek and Latin word roots.

Whether talking with friends or reading a book, you're constantly bombarded with root words. Here are more examples of roots, their meanings and other words that are formed by adding prefixes and/or suffixes to these language building blocks.

You probably noted that a couple of these words can either stand alone, such as “script” and “cede,” or serve as the building block to longer, fuller words.

Root Words vs. Base Words

The terms “root words” and “base words” are often used interchangeably. The two are related, but they’re not exactly the same thing.

A base word is a standalone English word that can also form other words with affixes (prefixes and suffixes). A root word is the Latin or Greek basis of a word that, generally speaking, can't be used as a standalone word. You may also see just "root" used to refer to the basic Greek or Latin word part that cannot stand alone. For more on that, learn whether base words and root words the same.

It might be hard for you to understand why you need to learn root words. However, the root words are like the roots of a tree; everything builds up from there. Therefore, root words hold the most meaning. Learning root words can help you see how the meaning of words builds and grows. Plus, if you know root words, a lot of times, you can have a clue as to the definition of unfamiliar words.

Be Wise About Your Roots

Every root word has a meaning, and that meaning corresponds to the new word made from it. Be careful, though; some root word combinations make less sense. Take the word “apology.” Its root word logos means "speech" or "reason," and the prefix apo- means “away from.” If you were to interpret the meaning of apology based on root words alone, you might think that it means "away from speech." That’s not a very good explanation for a word that is used to express regret or remorse. So understanding the meaning of the roots can help you in general, but it won't always provide you with a clear definition. To continue this compelling study, and learn more about the history of the words we use every day, check out some roots of English words found in Greek mythology.