Examples of Sarcasm: Understand the Meaning and Types

Sarcasm is everywhere! You can see it in everyday speech, literature, movies, and TV shows. Typically, sarcasm is used as a type of comedic relief, but it can also tell you loads about the personality of a character. Get a clear definition of this rhetorical device through sarcasm examples. 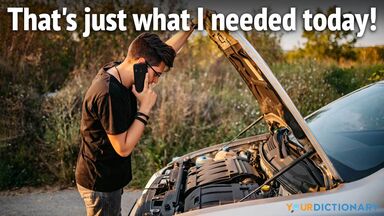 Sarcasm is an ironic or satirical remark tempered by humor. Mainly, people use it to say the opposite of what's true to make someone look or feel foolish. For example, let's say you see someone struggling to open a door and you ask them, "Do you want help?" If they reply by saying, "No thanks. I'm really enjoying the challenge," you'll know they're being sarcastic. Sarcasm is all about the context and tone of voice, which is why it works better verbally. It's something you'll know when you hear it.

Sarcastic jokes can also be used for comedic relief. For example, "I walked into my hotel room and wondered if the interior decorators thought orange was the new black." The main gist of sarcasm is that the words are not meant to be taken literally.

Sarcasm can come in all different types. Some are easier to catch on to than others.

Now that you know a bit more about sarcasm, let's walk through some examples of sarcasm for a better understanding.

Let's begin with everyday sarcastic meaning examples. Note the slight condescension in each. Again, sarcastic remarks aren't meant to be taken literally. However, they are driving a point home.

Literature provides wonderfully crafted sarcastic retorts and jokes for readers to enjoy. An author might develop a character with a biting tongue. Perhaps they're very blunt in their delivery. At other times, they might be sarcastic to let the other characters sense their dismissive nature.

Harry Potter and the Order of the Phoenix by J. K. Rowling

In the first example, Harry Potter is definitely letting his uncle know he thinks very little of his level of intelligence.

The Fault in Our Stars by John Greene

The Fault in Our Stars by John Greene delves into some pretty heavy topics like death and childhood cancer. But that doesn't mean you can't add a bit of sassy wit, as this quote by Isaac illustrates.

"Thank you for explaining that my eye cancer isn't going to make me deaf. I feel so fortunate that an intellectual giant like yourself would deign to operate on me."

The Martian by Andy Weir

Andy Weir also does a fabulous job displaying brooding sarcasm in his book The Martian. Explore a small preview through Mindy's retort.

"'Funny,' Venkat said. 'Be a smart-a** to a guy seven levels above you at your company. See how that works out.'
'Oh no,' Mindy said. "I might lose my job as an interplanetary voyeur? I guess I'd have to use my master's degree for something else.'"

The Hunger Games by Suzanne Collins

Katniss Everdeen has had a hard life in District 12. Therefore, she's rather snarky when she speaks. So you can find a lot of sarcasm in her dialogue.

"'District 12. Where you can starve to death in safety,' I mutter. Then I glance quickly over my shoulder. Even here, in the middle of nowhere, you worry someone might overhear you."

William Shakespeare had a knack for sarcasm in his work. Check out this example by Anthony.

"So let it be with Caesar. The noble Brutus / Hath told you Caesar was ambitious. / If it were so, it was a grievous fault, / And grievously hath Caesar answered it."

Sarcastic Quotes From Movies and Television

A character's level of sarcasm can say a lot about them. And some characters have it down to a science. Explore some examples of sarcasm from movies and television.

Penny is great at self-deprecating and brooding sarcasm. This is especially funny since most of her intelligent friends are not. See an example of a sarcastic remark toward Sheldon.

If sarcastic, snarky remarks were outlawed on TV, then Dr. House would not have a show. When it comes to brooding and deadpan sarcasm, Dr. House is the master. Get a small peek into Dr. House's personality.

Dr. House: "Ah, my birthday. Normally, I'd put on a festive hat and celebrate the fact that the Earth circled the Sun one more time. I really didn't think it was going to make it this year. But, darn it if it wasn't 'the little planet that could' all over again."

Friends: The One With Phoebe's Wedding, Season 10

When it comes to the TV show Friends, Chandler is known for his wit, quick retorts and brooding sarcasm. It's part of what makes him so funny and relatable. Get a quick preview of Chandler through this sarcastic excerpt.

Chandler: "I'm glad we're having a rehearsal dinner. I rarely practice my meals before I eat."

If you are looking for an example of deadpan sarcasm, look no further than the villain Hans Gruber in Die Hard. He was quite the master of the sarcastic retort as you can see.

Ellis: "It's not what I want. It's what I can give you. Look, let's be straight, okay? It's obvious you're not some dumb schmuck up here to snatch some purses, am I right?
Gruber: "You're very perceptive."
Ellis: "I watch 60 Minutes, I say to myself, these guys are professional, they're motivated, they're happening, i.e they want something, huh? Now personally, I couldn't care less about your politics."
Gruber: "You're amazing. You figured this all out already?"
Ellis: "Hey, business is business. You use a gun, I use a fountain pen. What's the difference?"

Tony Stark and Bruce Banner provided a lot of comic and sarcastic relief in the Avengers movies. While Bruce Banner's sarcasm is always deadpan, Tony's is easy to pick out. See a short snippet of this sarcastic exchange.

Bruce Banner: "Tony, this might not be the time."
Tony Stark: "Really? That's it? You just rollover, show your belly, every time somebody snarls?"
Bruce Banner: "Only when I've created a murder bot."

If someone's being sarcastic, it's likely there's a bite somewhere in their words. If any of these sarcasm examples remind you of verbal irony, then you're onto something. Sarcasm is closely linked to verbal irony. Both rhetorical devices say one thing but mean another. The difference is that verbal irony is meant to be eye-catching or funny. Sarcasm is meant to be that, plus a drop of bitterness. For more on sarcasm's kin, check out the differences between sarcasm and irony.