Examples of Secondary Pollutants and How They’re Formed 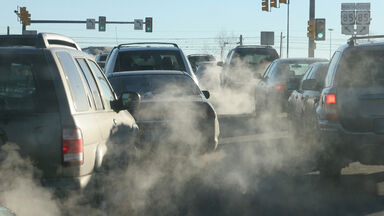 When it comes to pollutants, there are two different types: primary and secondary pollutants. The difference between them is how they are formed.

Secondary pollutants are created in response to primary pollutants messing up the precarious balance in the atmosphere. And, they can wreak havoc on our world. Let’s check out different examples of secondary air pollutants you might be familiar with.

In chemistry, you know that when you mix one chemical with another, it forms a new substance. That’s exactly what happens with secondary pollutants. The byproducts individuals and factories release into the air from burning fossil fuels, such as burning coal to make electricity, mix with the atmosphere in the air to create new compounds. And these new compounds cause all types of issues.

The ozone layer is detrimental to human existence when it’s in the right place. High up in the atmosphere, it protects people from harmful sun rays. However, near the ground, it’s harmful to humans. It’s also a major component of photochemical smog. This is the brownish haze that you might notice around large major cities, but winds can carry it to other places too.

When factories and cars burn fossil fuels, they release nitrogen oxide into the air. Now that would be all fine and dandy if nitrogen oxides didn’t mix with the ultraviolet light of the sun. When they mix, they create photochemical smog. Not only does smog make it harder to see, but it’s harmful to trees, plants, and humans.

When you hear acid rain, you might think of droplets that melt metal in the movies. But real acid rain isn’t as potent as that. Instead, when factories release sulfur dioxide and nitrogen oxides, the chemicals react with water and oxygen in the air to create nitric and sulfuric acids. These acids get mixed up with water molecules to form clouds and are eventually rained down onto earth. While these acids aren’t any good for the lakes, streams, and soil, they also cause weathering to rock and mountains.

When you ride in a car or truck, your exhaust leaks nitrogen oxides. When those nitrogen oxides go in the air, they mix with oxygen creating a new compound called nitrogen dioxide (NO2). While nitrogen dioxide can be found in both smog and acid rain, it’s also dangerous on its own in the form of particulate matter. You can breathe in this gas, which can cause airway and lung irritation.

Primary pollution is harmful enough, but when it mixes with the atmosphere, it creates damaging secondary pollutants like smog and nitrogen dioxide. These secondary pollutants can affect other areas too by creating acid rain. Interested in exploring more about pollution? Read about the 7 different types of pollution.