Poem writers use similes. Why? Because it's a lot more fun to say, "She was as funny as a car full of clowns" than to say, "She was funny." Didn't you get a much better visual from the first sentence? Now that you know the why of similes in poetry, it's time to look at some stellar simile poem examples that anyone can enjoy! 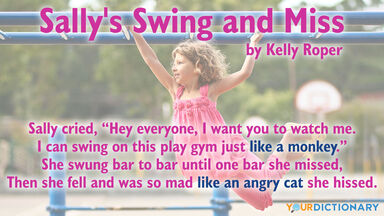 A simile is an easy way to compare two things without a lot of explanation, perfect for the sparse language of a poem. You'll recognize examples of simile poems because they include comparisons using the words "like" or "as." When a poem is called a simile poem, it simply means that it uses similes. As long as the comparison is one thing to another, whether or not the two are alike, you can consider it a simile.

Are you ready to get comparative and have some fun? Let's take a look at a variety of examples of simile poems and see if they'll inspire you to create some of your finest work yet.

Your Teeth by Denise Rogers

Here is an example of the simile poem "Your Teeth" by Denise Rogers drawing a comparison between teeth and stars.

"Your teeth are like stars;
They come out at night.
They come back at dawn
When they're ready to bite."

Kelly Roper likens daydreaming to a balloon floating up into the air in this simile poem example.

"Jerry's mind wandered during class
Like a balloon floating up in the air.
While he daydreamed about eating lunch
His stomach growled loud like a bear.
His classmates laughed like hyenas,
Which made him feel like a fool.
From now on he'd listen to his mom
And eat breakfast before coming to school."

Also by Kelly Roper, this example of similes in poetry continues the fun with swinging on a play gym.

"Sally cried, 'Hey everyone, I want you to watch me.
I can swing on this play gym just like a monkey.'
She swung bar to bar until one bar she missed,
Then she fell and was so mad like an angry cat she hissed."

A simile is an effective rhetorical device used by writers. So, it pops up in famous poems a lot. Take a look at several examples of simile in poetry.

A simile poem and a classic nursery rhyme that everyone has probably heard before is "Twinkle Twinkle Little Star."

"Twinkle, twinkle little star,
How I wonder what you are
Up above the world so high,
Like a diamond in the sky."

A Lady by Amy Lowell

In "A Lady," Amy Lowell brings the description of a woman to life with similes.

"You are beautiful and faded
Like an old opera tune
Played upon a harpsichord;
Or like the sun-flooded silks
Of an eighteenth-century boudoir."

"Simile" by N. Scott Momaday is one of the few poems where the entire poem is a simile. It's comparing people to deer.

The Base Stealer by Robert Francis

"Poised between going on and back, pulled
Both ways taut like a tightrope-walker,
Fingertips pointing the opposites,
Now bouncing tiptoe like a dropped ball
Or a kid skipping rope, come on, come on,
Running a scattering of steps sidewise,
How he teeters, skitters, tingles, teases,
Taunts them, hovers like an ecstatic bird,
He's only flirting, crowd him, crowd him,
Delicate, delicate, delicate, delicate—now!"

Greater Than That by Joyce Garacci

Poems depict all emotions. You can feel the fear and confusion in these lines from the simile poem "Greater Than That" by Joyce Garacci.

"Peering through the drape
Of my synthetic cell,
How I long to escape
This paralyzing hell.

Like a bruised, little bird
Too confused to fly,
I'm trapped, in a word,
So confined am I.

A captive, collared lion
Alone in its pen,
I'm pacin' and dyin'
In a manmade den.

For an eagle was not meant
To be locked in a cage,
Its life to be spent
Like a picture on a page.

And when a mighty lion
Is deemed a lesser cat,
It will spend its time tryin'
To be greater than that."

One of the great poets, Robert Frost, also used simile in his writing. Explore one example in his famous poem, "Design."

"I found a dimpled spider, fat and white,
On a white heal-all, holding up a moth
Like a white piece of rigid satin cloth--
Assorted characters of death and blight
Mixed ready to begin the morning right,
Like the ingredients of a witches' broth--
A snow-drop spider, a flower like a froth,
And dead wings carried like a paper kite."

The beauty of poetry is that it offers endless ways to convey meaning to the world. Examples of simile poems use "like" or "as" to make comparisons between two or more things. Being able to use similes in your poem helps clearly convey your message.

Don't forget; there are many other types of poetry examples. You've got free verse poems, ballad poems and even long epic poems. Which one will ensconce your words as you prepare to share your thoughts with the world?