Examples of Slander and Libel Including Real-Life Cases

Slander and libel are both forms of defamation. Both involve making false statements that damage a person's reputation. Slander is spoken, while libel is written. Discover more about what libel and slander really are and review some real-life examples of both types of defamation. 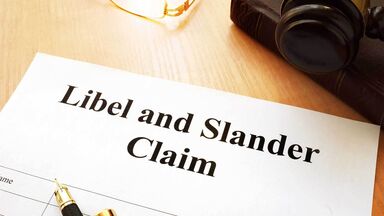 For information to be defamatory, it first has to be false. It also has to meet one or more other conditions. False information is defamatory if it:

For a private person to pursue defamation charges, the individual would need to be prepared to demonstrate that he or she experienced harm in one of the above three ways. If the defamatory information was conveyed via spoken communication, it would represent an example of slander. If it was communicated in writing, it would be libel.

For a public figure or public official, such as a celebrity, news personality, professional athlete, best-selling author, political leader, or another high-profile individual, there is an additional requirement in order to be able to make a case for defamation. Such individuals also have to prove actual malice, which is quite difficult to do.

In order to prove actual malice, the public figure or public official would have to have solid proof that the source of the false information either definitively knew the information was false or acted with reckless disregard for whether it was true or not. Otherwise, the courts view even false information about high-profile individuals to be protected under the First Amendment to the United States Constitution as free speech.

Celebrities often have to deal with false rumors and news reports that meet the conditions for slander and libel. However, they would also have to proove actual malice in order for a court to find in their favor if they decided to move forward with a lawsuit. There are very few celebrity defamation cases with actual legal findings, but there are some.

Celebrities aren't the only ones in the public eye who experience slander and defamation. Like celebrities, other public figures would also have to demonstrate actual malice in order to prevail in a libel or slander lawsuit. It is rare for political figures to attempt defamation suits. When they do, they are rarely successful, but there are a few examples.

If false information along the lines of the examples listed below meets the conditions of defamation listed above, they would represent slander if spoken and libel if written. Assuming the people impacted are private persons rather than public officials or public figures, the victims would not need to demonstrate actual malice.

Learn More About the Law

Slander and libel are interesting legal concepts. Reviewing some examples of yellow journalism can provide insights into the fine line between free or protected speech and misinformation that crosses the line into becoming defamation. If you're interested in learning more about the law, expand your expertise by learning some key legal abbreviations. This can help you better understand legal documents and reports of court proceedings.