Conflict theory in sociology describes society’s tendency to change and develop due to perpetual conflict between classes. It is one of the four paradigms of sociology, which include functionalism, symbolic interactionism, and feminism. Examples of social conflict theory can be found in a variety of situations. 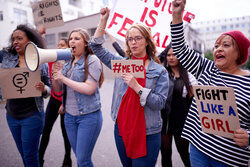 Women in Me too demonstration
Advertisement

Origin and History of Conflict Theory

The 19th-century philosopher and revolutionary Karl Marx saw society broken into two classes: the proletariat (working class) and bourgeoisie (owners of the means of production).

To Marx, societal conflicts arise due to competition for limited resources in an economy, leading to an eventual revolution and/or war. Ruling classes kept working classes in states of oppression with hegemony, which imposed dominance with social rules that all obeyed.

Political economist Max Weber extended this definition to include multidimensional class levels, such as those based on race, gender, and religion. He believed that in addition to political revolution, social conflict and change can result from discourse and the exchange of ideas.

Patterns of class conflict theory occur when one class of people is systemically empowered over another. The less empowered class demands a share of resources that the more fortunate class has in abundance, leading to social conflict. Here are some real-life examples of conflict theory in both economic and societal situations.

Part of the backlash following the 2008 economic crisis, Occupy Wall Street was a two-month political protest on Wall Street, New York. Its slogan, “We Are the 99%,” referred to the increasing wealth and income discrepancy between the wealthiest 1% of the population and the rest of the country. Time Magazine named “The Protester,” both international protesters and those involved with Occupy Wall Street, as its 2011 Person of the Year.

Inherent tracking systems in the public education system create their own class stratification. Gifted and advanced students (who are more likely to be from families with time and financial resources that aid educational success) receive skills that prepare them for college and future careers.

Average-performing students and struggling students do not receive these same opportunities in their classes, which are often more focused on remediation and learning trades. If these students are able to make it to college, they will be economically disadvantaged due to student loans. This conflict has led to a national conversation about the affordability of college and the feasibility of canceling student loan debt.

Crimes committed by members of wealthier classes, such as powerful CEOs or celebrities, often receive less punishment than crimes committed by people of minority races or lower socioeconomic status. Marx maintained that because the definition of crime and criminality is dictated by those with societal power, the criminal justice system is another way to subjugate the working class while elevating the higher class.

Another way for ruling classes to oppress others is to abuse the power they hold over women and men in subordinate careers. The MeToo movement, which began in 2006 and had a social media resurgence in 2017 as #metoo, identified how widespread the issue of workplace sexual abuse and harassment had become. This type of social revolution reflects the inevitability that both Marx and Weber predicted when writing about conflict theory.

Sociologist W.E.B. Dubois explored double-consciousness, which is the sensation of having two identities (in his case, an American and a black American) that are treated differently. Through his formation of Racial Formation Theory, Dubois maintained that racism in America was systemic – and that an individual racist was not needed to maintain the discriminatory system.

Black Lives Matter is a social movement that protests violence against black people. It began in 2013 after George Zimmerman was acquitted in the shooting death of Trayvon Martin. The movement’s supporters continue to demonstrate when black people are killed in situations that are perceived to be non-threatening.

Like the civil rights movement that came more than 60 years before, Black Lives Matter is another example of a social revolution after years of unequal treatment.

The fight for gay rights culminated in American politics in 2008 when Proposition 8 passed in California. It defined marriage as between a man and a woman. The proposition gained international attention as its passage seemed to indicate that the gap between gay and straight marriage rights would remain. But, proponents of gay marriage protested political donors and boycotted businesses, indicating that the conflict between the two classes was too strong.

The California Supreme Court later overturned the proposition, and the U.S. Supreme Court followed suit in 2015, making same-sex marriage legal in the United States. The conflict redefined the status quo in American politics.

Like other sociological perspectives, conflict theory is based on historical and societal patterns. It’s not the only way to explain the way that society words. If you’d like to learn about more ways to see society and human behavior, take a look at other influential ideologies from around the world. Boost your knowledge of society further with a list of key sociology terms and concepts too.