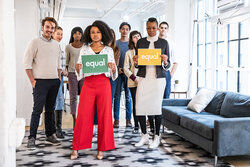 When you look at social justice, it is all about equality. To be socially just, every individual must be treated equitably and fairly by society.

Unfortunately, around the world, this utopian ideal is far from reality. Social injustices can happen at small and global scales, in schools and by whole diverse groups. Whether it is the segregation of an entire cultural group or bullying in the hallways of a school because of your sexual orientation, social injustice is everywhere.

With the modern era, the face of social justice has changed. While rallies and marches are still prevalent, the Internet is also used to bring social justice issues to light. This can be seen through movements like #blacklivesmatter and the #metoo movement against sexual harassment. These campaigns work to expand issues into bigger movements that rally activists together.

Now that you know what social justice is and how it's changed, it's time to take a look at a few historical and modern examples.

An ultimate example of racial discrimination was slavery, which was abolished in America in 1865. African Americans and people of color were forced into servitude on homes and farms, and they were treated deplorably.

You would think that slavery was a non-issue in current culture. However, it is still a social injustice issue found around the world. As of 2017, according to Free the Slaves, 40 million people around the world were still trapped in some form of slavery, including marriage slavery and forced labor.

Stereotyping is something that can happen to any racial group. While there is positive and negative stereotyping, both can have consequences in a society. For example, since 9/11, Muslims have faced discrimination and prejudice in America, sparked by fears of terrorism and acts committed by the Taliban.

A famous historical example was the segregation of Black Americans in the U.S. via Jim Crow laws. Black Americans were required to use specific schools, houses, and medical services, among other institutions and facilities, that were separate and of lesser quality than white Americans.

Another famous example of segregation was apartheid in South Africa. Many civil rights movements were founded on the unequal treatment and segregation of a cultural or racial group.

Discrimination comes in all shapes and sizes. The number of birthdays that you have accumulated is another example. Ageism, where the elderly are discriminated against, creates negative stereotypes of the elderly being weak, feeble, or unable to change. A few examples include being denied work and or being seen as a burden to society.

Many times, the elderly are forced into retirement or looked over for work. For example, workers that are over 60 years of age may be asked to retire from their career. They may be laid off to bring in younger, less experienced workers. Those who do contractual work, like farming, may be looked over because of their age, leaving them with little way to support their families.

Seen as a Burden

An older individual might also be seen as a burden by their family and their society. For example, many neighborhoods tailor themselves to younger generations through playgrounds and new-age restaurants. Those of advanced age may be put into a nursing home or retirement community the moment that society sees them as being no longer useful. However, Senior Lifestyle has shown that children who grow up with an older individual can benefit tremendously.

Beyond discrimination based on age, other hot topics both currently and historically are gender and sexuality. In recent years, gender has morphed into a complicated topic that goes beyond the binary designations of male and female. Explore how these issues can affect work life, school and even your home.

When it comes to wages in the workplace, there is a noticeable differentiation between men and women. According to the American Association of University Women (AAUW), in 2018, the gender pay gap from men and women for the same job was 82 percent. Stated simply, women make 82 percent of what men make doing the same work. This can be further broken down into a pay gap for minority men and women.

When it comes to oppression and human rights, individuals of the Lesbian, Gay, Bisexual, Transsexual and Queer (LGBTQ) community face several forms of social injustice and oppression. For example, same sex marriages are outlawed in some states and countries. Additionally, transsexual students often face discrimination and bullying within school settings.

Globally, steps are being made to close the education gap between male and female students. However, there are still several areas around the world where girls may never set foot into a classroom at all. UNESCO notes that more than nine million girls never go to school, compared to only six million boys in areas of Africa.

Social workers and human rights activists are working tirelessly to combat issues relating to children and their welfare. Despite their efforts, there are still several problems children face that are harmful to their health and mental wellbeing.

Laws are in place around the world to ensure a safe work environment for children. These laws were drafted from historically harsh and dangerous working conditions for children. While many would like to believe that child labor is a thing of the past, it persists in some areas around the globe.

As an example, India still has children working in forced labor, producing carpets, clothing, footwear and yarn. Not only are conditions unhealthy and unsafe, but the work hours are also very long.

Thousands of children globally are being neglected. They're also being physically, sexually and emotionally abused. The World Health Organization (WHO) reports that as many as a quarter of adults have been abused as children. This abuse has both social and economic impacts that include mental health problems.

Many laws have been passed over the years to help enable students with special needs, like those with autism or ADHD. This wasn't always the case, however. Prior to laws like No Child Left Behind and Individuals With Disabilities Education Act (IDEA), many children were simply neglected in their education or they were shuffled into special schools and asylums if they had learning disabilities.

While the world is making progressive steps toward equality for exceptional students, many point out how labeling and stereotyping a child based on their disability can have lasting, negative effects. Additionally, many countries around the world lack any adaptive services or special education for exceptional children.

Poverty and economic injustice is a pressing issue for human rights and social justice. Not only do men, women and children in the U.S. and abroad lack access to housing and food, but many also lack access to the basic human necessity of clean water. Dive into social injustice issues created by poverty.

When you think of poverty, you might think of having little food or maybe living in a homeless shelter. However, the sad truth is that many individuals don't have access to food, clean water, schooling, healthcare or even sanitation at all.

According to The World Counts, more than 485,000 children die from lack of food, shelter or clean water each year. Within the U.S. alone, more than two million children lack clean water, especially Native Americans.

Poverty and disease go hand in hand. Access to quality healthcare is harder when your income is lower, but access to quality food is diminished too. This means heart disease and diabetes are more likely among impoverished individuals.

While there are programs in America for those in poverty, these programs are far from perfect. This means that many poor individuals will go without basic care. Globally, among poorer communities, finding access to healthcare or doctors is nearly non-existent. The World Bank and WHO state that nearly half the world lacks essential health services access.

However, the term itself has taken on a negative connotation recently because of the types of people who are called social justice warriors. These are typically online bloggers or activists who jump on the bandwagon of the most recent social injustice. They then get into overzealous debates that appeal to emotions over logic.

A social justice warrior is seen as a self-righteous individual, someone who is looking for online attention rather than promoting the actual cause.

Human Rights for All

Creating human rights for all isn't as easy as one might think. Rather, it is a long, involved process with new social justice issues coming to the surface daily. When it comes to social justice, explore examples of courage to see how you can make a change. You can also explore customs, traditions and values from different cultures, like the meaning of the Kwanzaa holiday, to better understand others. From there, you can choose a social justice topic for an essay that dives deeper into the idea.