Examples of Socialism: Definition and Features in Simple Terms

You've probably heard of socialism, but do you know what it is? The term socialism refers to any system in which the production and distribution of goods and services is the shared responsibility of a group of people. Still confused? Get a clear definition of socialism, along with socialism examples and features. 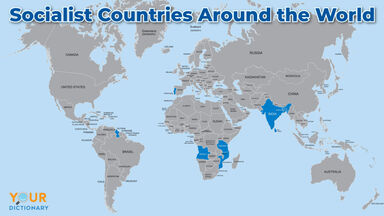 socialist countries around the world
Advertisement

Socialism can be hard to understand. However, a simple socialism definition would be where a government or group provides everything to the people or workers. You can think of this as everything being owned by the public. It's also called common ownership. So, the government, rather than corporations, regulates everything from your wage to healthcare. The theory of socialism was developed by Karl Marx. To get a better idea of socialism, it can be helpful to look at some of the elements.

When it comes to socialism examples, there are a few defining characteristics you notice in socialism.

Countries aren't defined as socialist if they haven't declared themselves as such in a constitution or through their national name. Therefore, throughout history, socialism may have been practiced in many countries, but the country itself has not been labeled as socialist. However, a few countries to declare themselves socialists include:

Other Examples of Socialism in Economic Systems

While some countries declare themselves socialist, others include socialism in some parts of their country. View socialism within a country's economic systems, healthcare, education, corporations, or other factions in these examples.

Many people use the term socialism to describe behavior in which a government takes on a larger role in the economy. For example, many opponents claim that former President Barack Obama, of the United States of America, is a socialist due to his push for government-run healthcare.

In Karl Marx's system, socialism was supposed to be a type of utopian system where everyone is treated equally. However, critics of socialism note that it takes away many freedoms afforded in a capitalist society. Additionally, it places much of the power in the government since everything from wages to healthcare to food is under their control. This can quickly escalate to an authoritarian regime if the power is placed in a single dictator.

The term socialism is not always used accurately. It is beneficial for people to have some actual socialism examples to get a clear picture of this economic theory. Now that you have a basic understanding of socialism, dive into communism examples. Then, explore the main differences between fascism, communism and socialism.