Sociologist C. Wright Mills shared, “Neither the life of an individual nor the history of a society can be understood without understanding both.” Written in 1959, The Sociological Imagination is his book that encourages people to replace the lenses they're currently using to view their own lives and alter their perspectives. Mills encourages every member of society to stop boxing their personal situations into isolated corners and open up to the wider landscape of the world. Reviewing a selection of sociological imagination examples can help you better understand this concept. 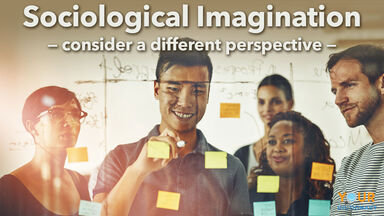 Understanding: What Is Sociological Imagination?

What is perhaps the most common example of the sociological imagination pertains to unemployment. An individual facing unemployment might feel defeated, depleted and discouraged. That person is likely to look in the mirror and say, "You didn't work hard enough. You didn't try hard enough …" You, you, you.

If Mills were around, he'd say, "Not you. The world around you." Mills believed things only worked when you saw "the vivid awareness of the relationship between experience and the wider society." He encouraged people to stop focusing on themselves alone and to look at the wider landscape of society.

If you take Mills' stance, you'll start to believe that every problem faced by an individual has roots in society as a whole and is faced by many others. There's some truth to that, isn't there? It's unlikely that every struggle you face is unique to you alone. There are hundreds or thousands, if not millions of others who are going through the same struggle. However, Mills never thought sociology alone was the ultimate science. He felt sociologists, psychologists, economists, and political scientists should all work together. This makes sense, given the broad lens through which he viewed the world.

Something as simple as drinking a cup of tea or coffee can be examined from several different perspectives. It's rarely just a solitary person from England sipping a warm cup of Earl Grey on a misty morning. What else could it be?

Other everyday behaviors that can be viewed using the sociological imagination technique include exercising, watching TV or owning a pet. How many different perspectives can you think of for these activities?

Consider the choices that need to be made when applying to college. You might think this is a solitary path: you have to pass the tests, you have to nail the college entrance essays. But, is it such a solitary path? Never mind the obvious point that millions of others are also doing it. Even your personal situation is broader than your immediate world when you take into consideration your family members, friends and school teachers.

The notion of boxing up your college choices into a solitary experience can easily be shaken up by sociological imagination. The same is true with other college-related choices, such as whether you'll live in a dorm or off-campus or if you'll pledge a fraternity or sorority.

Example: Deviance and the Sociological Imagination

Whether we see it on TV or see it in real life, deviance is prevalent in society. Where do we even start? There's common thievery, random murder, gang violence, drug and alcohol abuse, and on and on. Is deviance a personal act of desperation? Maybe. Those who behave in a deviant way make bad decisions that harm others or themselves. Is that because they're terrible people? That's not for us to say.

The sociological imagination is never meant to excuse someone's position in life. Whether we're dealing with unemployment or gang members, it's never okay to just put it all on society. We have to show some accountability for our choices and actions. It's just that life is rarely a solitary situation where our individual choices are untouched by societal or cultural variables.

We might consider social media to be a 21st-century phenomenon. Mills would probably say, "Is that so?" Social media didn't pop out of thin air and land in the laps of millennials. It must've taken root somewhere, evolved from something else. It would be hard to call social media a personal experience. Just look at the name. But, how is it impacting you every day? This question will have different answers for everyone.

Every time you click on that Instagram icon on your phone, millions of others (or more!) could be doing the exact same thing. So, while no one considers Instagram to be the lovechild of, say, the beeper, there are wider lenses to consider when contemplating current life. Indeed, nearly everything people experience today is an extension of some prior period in life.

When contemplating marriage, what is your perspective? Do you think all our ancestors got married because they fell madly in love? Did some of them get married because their parents arranged it? Did others get married simply because they felt it was "time"? How about today? Does everyone marry strictly for that fairy tale kind of love? Or do they marry because it's what society tells them is right? Consider a few of the many perspectives on this topic.

This is not a judgment on any decision any person makes. It's a commentary on how something so personal, love and romance, isn't always a singular experience. Taking out those wider lenses, we might see that the way we view dating and marriage has a little bit to do with what our friends say, how our parents feel or the feared stigma of dying alone surrounded by cats.

Ultimately, using the social imagination means making a connection between your experiences or point of view and society as a whole. In the end, the sociological imagination examples of unemployment, education, deviance, and marriage are not singular situations. They're rarely dealt with by only one individual. They're often experienced by thousands, if not millions, of others across the globe. Each of these situations evolved from some past event or way of living. Thus, whenever someone thinks their current station in life is unique, just imagine Mills asking, "Is that so?" Do you believe every outcome has a social cause?

Use those wider lenses to consider the relationship between your personal experience and society as a whole. This will help you change perspectives on your story and your connections to society, to institutions, to history. Now you’re using your sociological imagination. Isn't sociology fascinating? Chances are that you'll also find psychology to be fascinating as well. Why not explore some key psychology terms and their meanings next?