The term speciation, which was first coined by biologist Orator F. Cook, refers to the process of evolution through which new species arise. In nature, there are four different means of speciation: allopatric, parapatric, sympatric and peripatric. Learn about the different types and discover speciation examples. 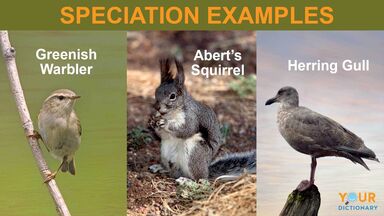 Allopatric speciation occurs when an animal population is forced to be split between two geographical areas as a result of a geographical change. There is some type of barrier keeping the groups apart. As a result, the groups remain isolated from each other and cannot interbreed.

Each group adapts to its specific habitat. As a result, mutations occur in the split populations which affect the ability of the two groups to reproduce if and when they are reintroduced. This type of speciation is also referred to as geographic speciation. Scientists have observed this in Solomon Island bird species.

Peripatric speciation is similar to allopatric speciation in that the different groups are separated from each other by a physical barrier. With this type of speciation, though, one of the groups that split from the original group is significantly smaller than the other. Due to the small size of this group, the unique traits that develop become more predominant in that group.

The differences in this group will become more pronounced in the offspring of subsequent generations, making them more and more distinct from the larger group. As in allopatric speciation, the new species is unable to reproduce with others in the original population. Researchers have observed this type of speciation with the Scrophularia lowei, a plant that developed in Macaronesia.

Parapatric speciation occurs when new species are dispersed across a large area. There isn't a barrier separating groups that inhabit different parts of the area from one another. They are only partially separated and therefore do sometimes make contact and could feasibly mate. However, due to distance, they tend to reproduce with other species members that occupy the same geographic region.

Environmental differences in the area, such as pollution or habitat destruction in certain parts, lead to unique characteristics. An example of this is when a species of grass becomes tolerant to heavy metals in the soil near a contamination source, such as a mine, even though such tolerance does not exist in other grass of the same species that is not in a contaminated area.

Sympatric speciation is differentiated from the other three because it occurs in one geographic location. It starts with a group of same-species animals sharing the same habitat, with some members evolving differently to the point where a new species (that cannot breed with the other) results. While this type of speciation may not be as common as the other types, it does occur, as evidenced by the sympatric speciation of cichlid fish in Africa and Nicaragua. The cause of sympatric speciation is not known but could be based on pollution or varied food sources or traits that spontaneously develop.

Some Examples of Speciation

It is important to note that speciation occurs when there is a new species, not just a new sub-species. A new species is not able to reproduce with members of the original population.

Speciation can be natural and can occur as a normal part of the evolutionary process. Artificial speciation is also possible and can be created by laboratory experiments or through agriculture and animal husbandry. Fruit flies are a primary example of artificial speciation. Another well-known example is domestic sheep.

Now that you have a better understanding of what speciation is and is not, it's time to enhance your knowledge about evolution and adaptation. Explore examples of evolution in biology and beyond. Then, review examples of plant adaptations in different environments.