Can anything be better than the best? What about smaller than the smallest, or funnier than the funniest? Superlative adjectives help us understand the most — or least — about a noun. Keep reading for superlatives examples with a variety of different endings and uses. 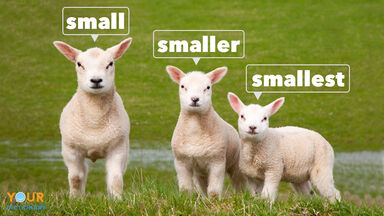 One-syllable adjectives, such as "small," add -est to create the superlative "smallest". While most two-syllable adjectives also add -est, they can use "most" or "least" before the word instead, such as "gentlest" or "most gentle." It just depends on your preferred style.

If the adjective has a consonant + single vowel + consonant spelling, the final consonant is doubled before adding the ending. For example, "big" becomes "biggest," and "fit" becomes "fittest."

Superlative examples that add -est include:

Superlatives That Change the Y to an I and Add -est

Superlatives That Add Most or Least

Adjectives with three or more syllables always form the superlative by putting the word "most" or "least" in front of the adjective. These ones are easier to remember because adding -est to a three-syllable word just sounds funny!

Now that you've seen lots of examples of the superlative form of adjectives, take a look at the examples below to see how these describing words are used in a sentence. You may recognize some of these famous quotes!