You've probably heard of logic. Well, syllogism is a type of logical argument using deductive reasoning. Learn more about what syllogism is, how it's used and the rules for using it in your next argument through some syllogism examples. 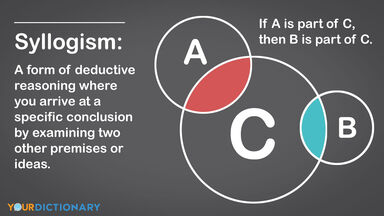 While syllogism is a weird word, it's quite simple to understand. Syllogism derives from the Greek word syllogismos, meaning conclusion or inference. A simple syllogism definition is that it's a form of deductive reasoning where you arrive at a specific conclusion by examining premises or ideas.

All roses are flowers.
This is a rose.
I'm holding a flower.

However, there are different types of syllogisms. Take a look at each type of syllogism, along with examples.

The type of syllogism that contains three components is a categorical syllogism. However, there are two other major kinds of syllogism. Take a look at each one with examples. Then you can go on to explore enthymemes and syllogistic fallacy.

Conditional syllogisms follow an, "If A is true, then B is true" pattern of logic. They're often referred to as hypothetical syllogisms because the arguments aren't always valid. Sometimes they're merely an accepted truth like these examples.

Disjunctive syllogisms follow an, "Either A or B is true, if A is false, then B is true" premise. They don't state if a major or minor premise is correct. But it's understood that one of them is correct.

An enthymeme is not one of the major types of syllogism but is what's known as a rhetorical syllogism. These are often used in persuasive speeches and arguments. Generally, the speaker will omit a major or minor premise, assuming it's already accepted by the audience.

In an enthymeme, one premise remains implied. However, since one of the premises is common knowledge, this helps people to understand them.

Some syllogisms contain false presumptions. A syllogistic fallacy happens when you make two general statements to validate a conclusion. For example, when you say, "all dogs are mammals, cats are mammals, therefore, dogs must be cats." It's impossible to draw a conclusion based on the general premises you are making. Therefore, when you make an assumption based on general premises, you run the risk of making a false assumption.

Of course, not every black bird is a crow and not all of Ireland is beautiful. When preparing a speech or writing a paper, we must always make sure we're not making any sweeping generalizations that will cause people to make false presumptions.

There are six known rules of syllogism. However, they mainly apply to categorical syllogism, since that is the only category that requires three components: the major premise, minor premise and conclusion. Learn the six rules that ensure you're making a strong and accurate argument.

It's easy to look at syllogism in examples, but they can be used in more than just arguments. See a few famous examples of Syllogism found in literature and modern culture.

The Merchant of Venice by William Shakespeare

Syllogisms make for colorful literary devices. They explain situations indirectly, affording readers the opportunity to practice reasoning and deduction skills. William Shakespeare was a master of many things, including syllogism. Here is an example of a syllogism fallacy in The Merchant of Venice.

"Portia was a woman desired by many men. It was arranged that she would marry the man who could correctly guess which of three caskets contained her portrait. One casket was inscribed with, 'Who chooseth me shall gain what many men desire.' One man concluded that, since many men desired Portia, her portrait must be in that casket."

He was wrong. His assumption falls under the category of syllogistic fallacy. One cannot deduce that, since this casket contains what men desire, it's automatically the portrait. Men also desire fortune and power, for example. There wasn't enough evidence to leap from premise to conclusion.

A System of Logic by John Stuart Mill

Socrates is the subject of one of the most famous and easily understood examples of syllogism in philosophy. Note that it clearly follows the rule of three components.

This syllogism, found in System of Logic, draws a clear picture of how one statement, when known to be universally true, should point perfectly to another clear claim, thus drawing an accurate conclusion.

Keep syllogisms in mind when viewing advertisements. Many leaps are made in advertising, skipping either a major or minor premise.

Get ready for an enthymeme or syllogism fallacy. A blanket statement such as this skips one of the two required premises. Every time a woman likes a man, it can't be assumed he drives a Lincoln MKZ.

Understanding syllogisms helps you create masterful persuasive speeches and essays. They create a formula for you to abide by, in order to ensure your main point is flawless. Syllogisms also allow you to test your theories according to syllogistic fallacies. When examining your main argument or point for discussion, be sure you haven't made any presumptions that your audience might disagree with.

Maybe some women won't like MKZs. Perhaps they prefer a good ol' fashioned Mustang! Just keep your eyes and ears open while you allow syllogisms to drive your point home with clarity and truth. And if you need more help with fallacies, check out types of logical fallacies.