Examples of Symbiosis: Types of Relationships in Nature

Symbiosis comes from two Greek words that mean "with" and "living." It describes an ecological relationship between two organisms from different species that is sometimes, but not always, beneficial to both parties. Keep reading to learn about the different types of symbiosis and how they provide balance in various ecosystems around the world. 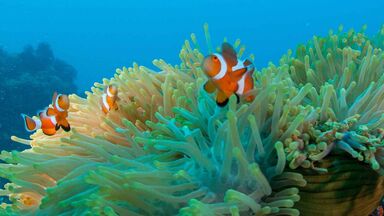 There are several kinds of symbiosis to consider when looking for symbiosis examples. Each type is often found in a habitat, but some are more common than others. The most common types of symbiosis include:

These symbiotic relationships are different based on which species benefits the most and whether they can live without each other. However, each one allows an ecosystem to reach a sustainable balance.

Some examples of mutualism in nature include:

Commensalism is a one-sided relationship where one of the organisms benefits greatly from the symbiosis. The other is not helped, but it is not harmed or damaged from the relationship either. In some of these commensalism relationships, the organism that is reaping the benefit will use the other for protection or transportation.

Examples of commensalism in habitats include:

In parasitism, one organism benefits from the relationship at the expense of the other. The parasitic organism may live inside another organism's body (endoparasitism) or on its surface (ectoparasitism). The host species often weakens and sometimes dies, but in most cases, the parasite needs it to stay alive so it can keep feeding on it.

Examples of parasitic symbiosis include:

Many species compete for the same resources in an ecosystem, which is called competition symbiosis. It may seem like this type of relationship is the opposite of symbiosis, but ecosystems depend on a balance of different species being present. If one species has an abundance of resources and another doesn’t, both species could suffer and possibly die out.

Examples of competition symbiosis include:

Predation is the process by which one organism feeds on another, typically one animal eating another animal. Herbivory relationships involve an animal eating part or all of a plant.

It may seem like predation is not an example of symbiosis because only one organism survives the encounter. However, without predation, other species would become too numerous and resources would become source. Predatory (or even herbivory) animals never kill every member of the prey species unless the symbiotic relationship is out of balance.