Examples of Symbolism in Literature

Symbolism is often used in literature to paint colorful scenes. It affords the writer artistic expression that supersedes bland writing. Beyond that, symbolism also allows readers to visualize complex or difficult subjects. And, if nothing else, it presents readers at the local book club with an opportunity to pick apart various lines of text, searching for hidden meaning.

Symbolism can be an object, person, situation, event or action that has a deeper meaning in the overall context beyond a surface understanding. When used properly, it can enhance a piece of writing and provide further insight to the reader. Together, let’s enjoy some examples of symbolism in literature. 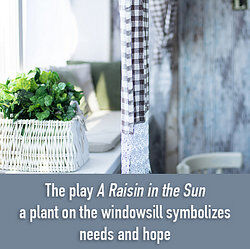 Symbolism in Novels and Plays

No doubt, you’ve come across symbolism in some of your favorite books. Below, we’ll discuss some of the classics, like Wuthering Heights, and move onto more contemporary works of art, including the Harry Potter series.

Wuthering Heights by In Emily Brontë

Emily Brontë went for symbolism right in the title of her novel. The “wuthering heights” are symbolic of the wild nature of the people involved in the story. It seems like, if Brontë could express herself with a symbol over the literal, she would’ve done so. Below, the foliage in the woods is symbolic of the ever-changing nature of love. And the rocks below the surface represent the necessary pain that comes from loving someone.

My love for Linton is like the foliage in the woods. Time will change it; I'm well aware, as winter changes the trees. My love for Heathcliff resembles the eternal rocks beneath a source of little visible delight, but necessary.

Aurora Leigh is an epic novel by Elizabeth Barrett Browning. She explores many ideals throughout the course of her work but it would seem women were a focal point for her. Instead of saying, “Women are undervalued,” she compares them to a pair of slippers one mindlessly slips into at night.

The works of women are symbolical.

We sew, sew, prick our fingers, dull our sight,

Producing what? A pair of slippers, sir,

To put on when you're weary

J.K. Rowling is a bit like Shakespeare. Each writer mastered numerous rhetorical devices, all in one work of art. Entire theses have been written about Rowling’s use of symbolism in her Harry Potter series. Let’s take a look at some of the more poignant examples:

As You Like It was one of Shakespeare’s many plays. He takes the big picture - the world - and symbolizes it on a smaller scale - the stage. Meanwhile, the “players” are a symbol for the people of the world. We’re all a part of the stage and we each have our part.

All the world's a stage,

And all the men and women merely players;

they have their exits and their entrances;

And one man in his time plays many parts.

Other Literary Examples of Symbolism

Literature is ripe with symbolic elements. Let’s glance through a few more examples of symbolism. Perhaps you’ll find the desire to pick up one of these books on your next trip to the library!

Without question, poetry is a written form of art. Beautiful images are painted in the space of a few stanzas. It won’t surprise you to see that poets are huge fans of symbolism. It allows them to take in-depth concepts and paint them in interesting terms that will, hopefully, spark the reader’s imagination.

"The Raven" by Edgar Allan Poe

What type of thoughts does a black raven conjure up for you? We’ve been conditioned to think of them as the carriers of bad omens. Perhaps it all began with Edgar Allan Poe. Nevertheless, he uses a black bird to stand for death and loss in what is perhaps his most famous poem of them all.

Open here I flung the shutter, when, with many a flirt and flutter,

In there stepped a stately Raven of the saintly days of yore;

Not the least obeisance made he; not a minute stopped or stayed he;

But, with mien of lord or lady, perched above my chamber door—

Perched upon a bust of Pallas just above my chamber door—

Perched, and sat, and nothing more

But the Raven, sitting lonely on the placid bust, spoke only

Till I scarcely more than muttered “Other friends have flown before—

"She Dwelt Among Untrodden Ways" by William Wordsworth

William Wordsworth sure knew how to make a lady feel special. In the lines below, he uses “springs of Dove,” “a violet by a mossy stone,” and a star “shining in the sky” as symbols for a quiet, unknown woman whom he loved very much.

She dwelt among the untrodden ways

Beside the springs of Dove,

A Maid whom there were none to praise

And very few to love:

A violet by a mossy stone

Half hidden from the eye!

—Fair as a star, when only one

Is shining in the sky.

She lived unknown, and few could know

When Lucy ceased to be;

The difference to me!

"The Rime of the Ancient Mariner" by Samuel Taylor Coleridge

In the poem below, Samuel Taylor Coleridge talks about an albatross, or large bird, that’s about to be hung around the neck of the protagonist. However, it’s not merely some strange form of punishment. And the bird’s not just a bird. Rather, it’s a symbol of the terrible sin he committed when he killed the bird. It’s representative of the burden he must bear as a result.

Had I from old and young !

Instead of the cross, the Albatross

About my neck was hung.

“He Wishes For the Cloths of Heaven” by W.B. Yeats

In this poem, William Butler Yeats is talking about “the heavens.” He wishes he could grant the heavens’ embroidered cloths to his beloved. In the end, however, he says he is too poor to provide her with these things.

However, even if Yeats had all the money in the world, he still couldn’t afford to buy the heavens. In this poem, his poverty is taken as a symbol of his (self-perceived) lack of talent, spirit, or imagination.

Had I the heavens’ embroidered clothes,

Enwrought with golden and silver light,

The blue and the dim and the dark cloths

Of night and light and the half light,

I would spread the cloths under your feet:

But I, being poor, have only my dreams;

I have spread my dreams under your feet;

Tread softly because you tread on my dreams.

Symbolism Is Never Going Out of Style

Symbolism is a rhetorical device that’s never going out of style. It allows writers to expose further truths, as they pertain to their message or theme. It also allows them to embrace the beauty - or the struggles - of life in thoughtful and unique ways.

Symbolism is, arguably, one of the strongest literary devices writers have. Much can be said behind while hiding behind the symbols that stream from nature and everyday life. Why not venture into a deeper dive on symbolism in poetry? Enjoy these Examples of Symbolism in Poetry.