Examples of Symbolism in Poetry

In poetry and other forms of writing, symbolism is often used to convey a specific meaning to the audience. Writers often employ this literary device as a means of artistic expression. Why say, "I'm lonely," when you can paint a picture of a lone moon "wandering companionless" through the night sky? How beautiful is that? Learn more about symbolism in poetry by looking at symbolism examples. 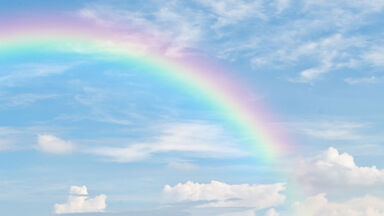 Examples of Symbolism in Poetry

So, what is symbolism in poetry? Symbolism is a literary device where symbols work to represent ideas. In symbolism, the symbols align with the overall tone and theme of the poem. That is, if it's a tough subject, the words take on a negative or morose tone, while the symbols evoke images of cold or dark objects. These indicators also align with the theme, or overall message, of the poem. Enjoy several examples of poetry with symbolism to see how it works.

My Heart Leaps Up When I Behold by William Wordsworth

In William Wordsworth's poem, we see sparks of hope. When he sees a rainbow in the sky, it's not merely a beautiful sight to behold. It also symbolizes his childish wonder. Wordsworth maintains a large part of his childish wonder by remaining in awe of the beauty of nature (and encourages his audience to do the same).

"My heart leaps up when I behold
A rainbow in the sky:
So was it when my life began;
So is it now I am a man;
So be it when I shall grow old,
Or let me die!
The Child is father of the Man;
And I could wish my days to be
Bound each to each by natural piety."

To the Moon by Percy Bysshe Shelley

In this poem by Percy Bysshe Shelley, the moon symbolizes loneliness and unrequited love. In fact, Shelley describes it as "wandering companionless." How sad. Notice the tone of some of the other words below, like "weariness" and "joyless." They align well with the symbolism invoked by a lonely moon.

"Art thou pale for weariness
Of climbing heaven and gazing on the earth,
Wandering companionless
Among the stars that have a different birth, —
And ever changing, like a joyless eye
That finds no object worth its constancy?"

XXIII: Crossing Alone the Nighted Ferry by A. E. Housman

In Alfred Edward Housman's famous poem, the ferry symbolizes death. Notice the narrator is alone on a nighted ferry; it aligns rather well with thoughts of death and dying. The final two words also align with the theme, indicating the narrator won't be found when the ship docks in the wharf.

In a deeper sense, this poem is also a nod to Greek mythology. You had to pay a coin (this is why Ancient Greeks put coins on the eyes of the deceased) to Charon, the ferryman, to take you across the river from Styx to Hades. Charon's job was to carry the souls of the newly deceased to the land of the dead.

"Crossing alone the nighted ferry
With the one coin for fee,
Whom, on the wharf of Lethe waiting,
Count you to find? Not me.

The brisk fond lackey to fetch and carry,
The true, sick-hearted slave,
Expect him not in the just city
And free land of the grave."

His Confession by The Archpoet

The Archpoet uses a withered leaf in this poem to symbolize aging. We're reminded of our elemental nature and the fact that, in the end, our bodies break down to a point where we're no stronger than a withered leaf.

"Seething over inwardly
With fierce indignation,
In my bitterness of soul,
Hear my declaration.
I am of one element,
Levity my matter,
Like enough a withered leaf
For the winds to scatter."

A Light Exists in Spring by Emily Dickinson

Symbols for hope and happiness are usually easy to pick up. You enjoyed visions of rainbows in Wordsworth's poem, now Emily Dickinson will use light in a similar fashion in her poem "A Light Exists in Spring." This, too, is a viable symbol for the representation of happiness and hope.

"A light exists in spring
Not present on the year
At any other period.
When March is scarcely here"

"First there's the children's house of make-believe,
Some shattered dishes underneath a pine,
The playthings in the playhouse of the children.
Weep for what little things could make them glad.
Then for the house that is no more a house,
But only a belilaced cellar hole,
Now slowly closing like a dent in dough.
This was no playhouse but a house in earnest.
Your destination and your destiny's
A brook that was the water of the house,
Cold as a spring as yet so near its source,
Too lofty and original to rage.
(We know the valley streams that when aroused
Will leave their tatters hung on barb and thorn.)
I have kept hidden in the instep arch
Of an old cedar at the waterside
A broken drinking goblet like the Grail
Under a spell so the wrong ones can't find it,
So can't get saved, as Saint Mark says they mustn't.
(I stole the goblet from the children's playhouse.)
Here are your waters and your watering place.
Drink and be whole again beyond confusion."

To no surprise, you come upon another poem that links nature and humanity. Romantic-era poet William Blake uses sunflowers to represent people. People sometimes grow weary as life carries on. Blake also uses the sun to symbolize life. Weary sunflowers count the steps to the sun. Or, weary people march their way to the end of their lives.

"Ah Sun-flower! weary of time,
Who countest the steps of the Sun:
Seeking after that sweet golden clime
Where the travellers journey is done."

Fortunately, not all of Blake's poems were bleak. It just so happens that two of his finest examples of symbolism come from rather dreary pieces. In "London," Blake offers a morose glimpse into London life during his time. He conveys his message without directly pointing any fingers. Notice how he uses "chimney sweepers" to refer to child labor, "palace walls" to refer to the monarchy and "charter'd" streets and rivers to refer to the power of chartered banks and investment firms over the common people.

"I wander thro' each charter'd street,
Near where the charter'd Thames does flow.
And mark in every face I meet
Marks of weakness, marks of woe.

In every cry of every Man,
In every Infants cry of fear,
In every voice: in every ban,
The mind-forg'd manacles I hear

How the Chimney-sweepers cry
Every blackning Church appalls,
And the hapless Soldiers sigh
Runs in blood down Palace walls

The Spring Is Passing by Matsuo Basho

Typically, haiku poems are full of symbolism. This makes sense since the writer must convey a lot in few words. Explore this famous haiku by Matsuo Basho, where the spring passing symbolizes the passing of life.

When it comes to symbolism examples in poetry, roses are commonly a symbol of love and romance. You can see this through the lines of Robert Burns's love poem. The red rose symbolizes love, while the melody symbolizes the beauty and grace of his lover.

So fair art thou, my bonnie lass,
So deep in luve am I;
And I will luve thee still, my dear,
Till a’ the seas gang dry."

Symbolism can be as sinuous as you please. That is, it can take readers through sharp curves and unexpected turns. But beyond the excitement of it all, symbolism is a powerful support system to the theme of any given work. If the poem's theme is the treachery inflicted upon the impoverished Londoners, then it makes sense to evoke images of dirty chimney sweeps and hapless cries. To continue your study into this evocative literary device, enjoy examples of symbolism in other types of works.