Symbolism can be defined as the practice or art of using an object or a word to represent an abstract idea. An action, person, place, word, or object can have symbolic meanings. When authors want to suggest a certain mood or emotion, they use symbolism to hint at it rather than just blatantly saying it. There are many symbolism examples in literature and the arts, as well as in everyday life. 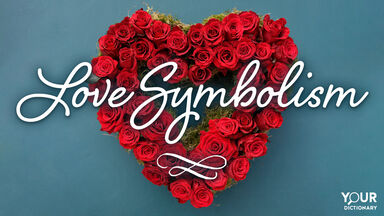 Symbolism can take on many forms and be present in many areas of life. A symbol is defined as something that stands for something else, often representing an abstract idea. In other words, the term symbolism simply means that something is being used to convey meaning associated with something else.

When a symbol (like a heart) is used to symbolize something (like love), that's a real-world example of what symbolism is. When heart imagery appears in a work of art, the artist may be using it to symbolize love rather than specifically using the word "love" in their work. Any time an object or an element of an object is used to convey meaning beyond its literal purpose, that object or element is an example of symbolism.

Every language contains an immense number of symbols whose intended meaning or significance is generally well-known or understood fairly easily in context. Of course, there is always room for interpretation with symbolism.

Everyday objects are often used to symbolize some bigger idea.

Flowers and Plants as Symbols

Botanical elements such as flowers and plants are often selected to be given as gifts or displayed because of their symbolism.

When you read a book, enjoy a poem or tell a story, the inclusion of animal characters can convey a message as part of the theme.

When used as a symbol, weather can set the mood of a scene or provide foreshadowing in works of literature.

A metaphor is a figure of speech that uses symbolism. It compares two things that aren't similar and demonstrates that they actually have something in common. In order to understand a metaphor, one must consider figurative meaning in addition to the literal meaning.

Allegories are stories told through the extended use of symbolism. They convey meaning that is not specifically stated within the literary work. A story, a poem or even a whole book can be an allegory, with symbolism permeating the work.

There are many allegory examples in literature, though the use of allegory is not limited to the world of literature. Any time someone shares a story that has a moral or meaning that the listener is expected to infer from the symbolism used, then that is an example of allegory.

When artists want to say something with their work, symbols are a great way for them to communicate. In this medium, symbols are often tangible items, like an animal, object or plant. Certain types of symbolism are representative of art produced during a specific time in history.

Symbolism in Literature and Poetry

Look Beyond the Literal

Whether you're enjoying art on a canvas or a novel on an e-reader, look beyond what you notice at first glance. Go forward with a keener eye for the layers of symbolism that surround you, both in the physical and artistic worlds. Get started by learning more about figurative language.