Examples of Synecdoche: Part of a Whole

A synecdoche (pronounced si-nek-duh-kee) is a member of the figurative language family. It's an odd word for what is simply using part of a whole to represent the whole. In the phrase, "Check out my new wheels," "wheels" is an example of synecdoche used to refer to a "car." In this example, a part of a car (its wheels) is used to represent the car as a whole. Reviewing a few common synecdoche examples can help clarify the meaning of synecdoche. 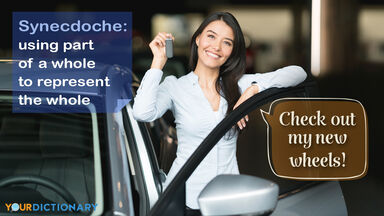 Synecdoche is an example of a type of figure of speech. Specifically, it is defined as a figure of speech in which a word or phrase with a literal meaning that refers to a part of something is used figuratively to represent the entirety of that thing. Alternately, synecdoche can also be used in reverse, such as using a word that actually represents the whole of something to refer to only a part of it.

Examples of Different Forms of Synecdoche

There are several different forms of synecdoche. The important thing to keep in mind is that with synecdoche, you're always going to be dealing with parts and wholes. To make sure you're fully aware of each angle, consider and examine some of the most commonly used varieties of synecdoche.

Using a Part to Represent a Whole

Using a Whole to Represent a Part

In the same way that a synecdoche can use a part to represent a whole, it can also use the whole to represent a part. This involves using a word that denotatively refers to the entirety of something when you're really only talking about a portion of it.

Referencing a Material to Name an Object

An interesting form of synecdoche involves using the name of a material commonly or formerly used to make something to describe the object. This is similar to using a part of something to refer to a whole, although in this case, the part is a compound rather than a component.

Synecdoche vs. Metonymy: How to Tell Them Apart

Metonymy is another form of figurative language. It can easily be confused with synecdoche. Both metonymy and synecdoche use a word or phrase to represent something else.

Let's consider the earlier example relating to the car. As previously mentioned, "wheels" is a synecdoche for "car." The word "ride" is an example of metonymy for a car. Why is it metonymy rather than synecdoche? Because the word ride is not part of a car, as is the case with the word wheels.

Consider the following sentence as an example: "Let's take my new ride out for a spin." Notice how the word car has been entirely replaced by another word that is not a part of a car. You ride in a car, so the replacement word is related to a car, but it's not an actual element of a car. That is the difference between synecdoche and metonymy.

Synecdoche vs. Metonymy: The Whole Truth

In truth, synecdoche and metonymy have a lot in common. Even grammarians can't always agree on whether an expression is an example of synecdoche or metonymy. Some synecdoche examples are considered to be a form of metonymy. Someone who believes this would argue that if something is a part of another, then that thing is, in fact, related to the original item.

Consider this brief quote from Cardinal Richelieu in a play written by Edward Bulwer-Lytton in 1839.

"The pen is mightier than the sword."

Does this phrase represent metonymy or synecdoche?

Figurative language comes in many shapes and sizes. Now that you're familiar with synecdoche examples and know how to differentiate synecdoche from metonymy, consider exploring more examples of figurative language. Consider starting with metaphors and similes because they are used so often in everyday language. From there, turn your attention to examples of personification. Each element transforms everyday language into something more interesting or thought-provoking. Because it colors ordinary rhetoric, synecdoche is a favorite in poetry and music lyrics.