Tanka poetry refers to a Japanese 31-syllable poem, traditionally written as a single, unbroken line. The word tanka translates to "short song." Similar to haiku poetry, tanka poems have specific syllable requirements. They also use many literary devices, including personification, metaphors and similes to allow ample visualization. Let's dive a little deeper into the art form and then enjoy some examples of tanka poetry for a better picture. 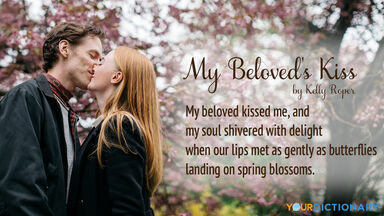 What Is Tanka Poetry?

In the 7th century, tanka poetry was so popular that nobles in the Japanese Imperial court would participate in tanka poetry competitions. These poems were also tender little keepsakes at the start of a romance. Two lovers would sneak away in the night to be together and send a tanka poem to one another the next morning to express their gratitude or love.

Format of a Tanka Poem

Traditional Japanese tanka poems consist of 31 syllables written in a single, unbroken line. In English translations, the tanka tends to take on a five-line form, which brings us to this important note. As you study tanka poetry, you'll notice it bears a resemblance to sonnets.

Midway through a tanka poem, there's a change in perception. In a sonnet, it's called the volta. In a haiku, there's typically a "turn" between lines two and three. As with a sonnet, the change occurs as a transition from examining an image to examining a personal response. To accomplish this transition, tanka poems include different literary devices like personification and metaphors. Explore a little more on the different types of poems.

Tanka poems are, again, similar to haiku poems in that they often discuss the same topics of emotions, seasons, nature, love, and sadness. Meet five tanka masters by looking at these tanka poem examples.

Lying on the Dune Sand by Takuboku Ishikawa

Poet Takuboku Ishikawa was born in 1882 in the Iwate prefecture of Japan. He dropped out of school at 16 to become a poet and is touted as a master of tanka poetry. He published his first collection of poems at 19 and moved to Tokyo in 1908 to become a part of the bustling literary scene. Sadly, he died young, at the age of 30, from tuberculosis. Here's a sample of one of his poems.

Machi Tawara is a contemporary Japanese poet, writer and translator. She's credited with revitalizing tanka poetry for modern audiences. She was born in 1962 in the Osaka prefecture in Japan. In 1981, she graduated from Waseda University with a degree in Japanese literature. Today, she manages to combine modern subjects with classic Japanese poetic forms. She has her own website, The Chocolate Box. See a sample of one of her translated poems.

"Cherry, cherry cherry trees begin to bloom,
and bloom is over --
In the park where nothing (it seems) ever happened."

In 1867, Masaoka Shiki was born in the Ehime Prefecture in Japan to a samurai class family. His maternal grandfather was a Confucian scholar. Although Shiki was a major figure in the development of haiku poetry, he also wrote extensively on the reform of tanka poetry. Dive into an example of one of his poems.

"The bucket's water
poured out and gone,
drop by drop
dew drips like pearls
from the autumn flowers."

Mourning for Akutagawa by Mokichi Saito

In 1882, Mokichi Saito was born in what is now known as Kaminoyama, Yamagata, Japan. He was both a poet and a psychiatrist. Saito graduated from Tokyo Imperial University Medical School before joining the psychiatry staff of Sugamo Hospital. Upon his death, Saito had published over 17 poetry collections, totaling more than 14,000 poems, including this tanka poem.

"Coming to a wall,
a lacewing Mayfly
is clinging to it --
the sheer transparency
Of the wings, their mournfulness."

A Spray of Water: Tanka by Tada Chimako

Poet Tada Chimako was born in 1930 in Fukuoka, Japan. She spent most of her childhood in Tokyo, in the midst of World War II. Chimako graduated from Tokyo Women's Christian University, where she studied French literature. Then, she moved on to Keio University to continue her degree in literature. She was a critically acclaimed writer, including haiku and tanka poetry. Check out one of her poems, A Spray of Water: Tanka.

While it's always nice to look at the great masters, it's helpful to look at a few original tanka poems. Kelly Roper demonstrates how varied tanka poetry can be with these original English examples.

My Beloved's Kiss by Kelly Roper

Do you remember a kiss from your love? In her poem, Kelly captures that magical moment perfectly.

My beloved kissed me, and
my soul shivered with delight
when our lips met as gently as butterflies
landing on spring blossoms.

With a Sigh by Kelly Roper

A common topic among tanka poems is nature, particularly the changing of the seasons.

The autumn leaf let go of
the branch with a whispered sigh and
wafted resignedly down to the earth,
its destiny fulfilled.

The Crash by Kelly Roper

Tanka poetry can evoke some incredible imagery, including how nature can sound.

A resounding crash
followed by deafening silence
before the wail of sirens
singing their mournful song
as Death rears his head.

The Question by Kelly Roper

Expressions of love feature prominently in these types of poems. See if you can relate to this perfect moment.

Joy shot into the sky like a rocket
when he asked,
"Will you marry me?"
and she replied,
"I will marry you, my one true love."

Struggle for the Perfect Tanka by Kelly Roper

Poets writing poems about poetry is perhaps the peak of human expression. The struggle to perfect the craft is a real one.

Sweating bullets,
the poet counted the syllables
and rearranged her lines
until her tanka poem
was utter perfection.

Poetry paints life through colorful verses and enigmatic imagery. Why not see what you can paint with your pen and paper? Although tanka is a beautiful art form, you can also try your hand at any of these other types of poetry. You can even let your hair down and dabble in a little free verse from time to time. See which form captivates your spirit.