A tautology is an expression or phrase that says the same thing twice, just in a different way. For this reason, tautology is usually undesirable, as it can make you sound wordier than you need to be and make you appear foolish. Occasionally, tautology can help to add emphasis or clarity or introduce intentional ambiguity. But, in most cases, it's best to choose just one way to state your meaning and eliminate the extra verbiage. Boost your understanding by reviewing some tautology examples. 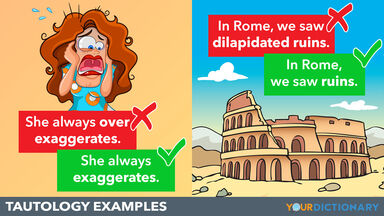 Tautology actually has two definitions. One definition explains the meaning of verbal tautology, while the other clarifies what logical tautology means.

Sometimes a tautology involves just a few words that mean the same thing. This is the definition of verbal tautology, which is illustrated in the following sentence.

I went to see him personally.

This is an example of verbal tautology, because the adverb "personally" repeats the idea already expressed in the single word "I". In everyday conversation, the addition of "personally" is used for emphasis to point out that the subject of the sentence is invested in the action or has overseen something. Technically, the word "personally" doesn't add any new information. It could be cut from the sentence without changing its meaning.

In the realm of logic, a tautology is something that is true in all circumstances. This can be done by using an either/or statement in such a way that the statement cannot be false. The following sentence illustrates the concept of logical tautology.

This sentence is always true because one or the other must be so. This is different from a statement that says, "Either the dog is brown or the dog is white," because that statement is not always true. Dogs can be black, gray or a mix of colors. Note that when you put both halves of a logical tautology together, it feels a bit redundant, just like a verbal tautology.

Tautology often involves just a few words or phrases in a sentence that have the same meaning. Sometimes one word is part of the definition of the other word. Though tautologies are common in everyday speech and don't diminish clarity, they should be avoided in formal writing so you don't repeat yourself unnecessarily.

The bold words or phrases in the following examples are tautological, which means they have similar meanings. There is no need to use both.

Even the best speakers and writers will sometimes let tautology slip into their work. Politicians are particularly prone to this verbal tactic because they often rely on political jargon and give slightly different versions of prepared remarks during many campaign stops.

Tautologies are occasionally more than just needless repetition. They can add beauty or cause the reader to think about a subject more deeply. Examples of tautologies in literature can show them at their best. They may be used for dramatic or comedic effect.

Song lyrics are often a treasure trove of tautologies, as in this case repetition can be artistic. Additional words can help fill out the rhythm or make a rhyme in song, so this repetition is often in service of the artistic work as a whole rather than accidental.

Tautology in Acronyms and Abbreviations

Sometimes there is tautology with the use of abbreviations and acronyms. This occurs when part of the acronym that stands for a word is then repeated in conversation. For example, saying "the ATM machine" is a tautology, because the M already stands for machine.

Repetition is often a key feature in advertising. Marketers want to make their messages stick in people's minds to encourage them to buy. For this reason, tautology is common on store signs and in advertising slogans.

In a logical tautology, the statement is always true because one half of the "or" construction must be so:

As you can see now that you have reviewed some tautology examples, tautology can sometimes be helpful to emphasize a point or to add poetic flair to speech or writing. In most cases, though, a tautology doesn't add new information to a statement and should be edited out of your writing. This will show readers that you are in complete command of your vocabulary and don't need to use extra words to make your point. In writing, as in life, sometimes less is more. To avoid letting tautology sneak into your writing, follow these tips for writing concise sentences.