Examples of Their, There and They’re in Sentences 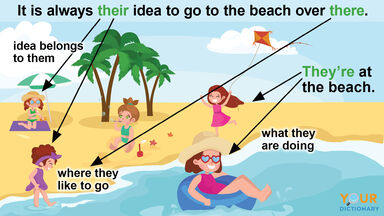 examples of their, there and they’re in sentence
Advertisement

"Their" is pretty straightforward. It always indicates possession by people or things. More specifically, "their" is a possessive pronoun. It replaces the noun in a sentence. Instead of saying, "That's the Murphy family's new dog," you can say, "That's their new dog." While "his" and "her" demonstrate singular possession (possession by one person), "their" is reserved for two or more people or things. Reviewing some examples of "their" in a sentence should help you get its usage right.

There Refers to a Place: Example Sentences

Think of "there" as a giant arrow. It's pointing toward a place or position, indicating direction. It also has an abstract function, for figurative places, as well as use in statements of fact, typically in "there are" and "there is" constructs. Reviewing examples of "there" in a sentence is a good way to observe how it can be used.

Now that you know the difference between there and their, you also need to be able to properly use they’re. Writing “they’re” is, in essence, the same thing as writing the phrase “they are.” The word “they’re” is simply a contraction of “they are.” If you can remove “they’re” from a sentence and substitute in the phrase “they are,” then you are using the contraction correctly. Review some example sentences showing proper usage of they’re to understand how this word should be used.

Sentences With Their, There and They’re (All 3)

Ready to amp things up? There will come a time when you'll have to use "their" and "there" in a sentence together, along with “they’re.” The following examples should help you figure out which word goes where when choosing among they’re vs. their vs. there.

Bottom Line: How There, Their and They’re Differ

In order to know how to use the words there, their and they’re correct, it’s important to remember how they differ.

Not too bad, right? The concepts are simple enough. It's just a matter of double checking yourself whenever you need to use these homophones. Practice makes perfect! While this important topic is fresh on your mind and you have just reviewed some example sentences, take the time to refresh yourself on the rules of proper usage for these words. Then, try your hand at these there, their and they’re practice exercises to make sure the concepts are clear in your mind.