Examples of Tone in a Story

The tone in a story indicates a particular feeling. It can be joyful, serious, humorous, sad, threatening, formal, informal, pessimistic, or optimistic. Your tone in writing will be reflective of your mood as you are writing. Learn more about tone in a story and how it's used in writing through examples. 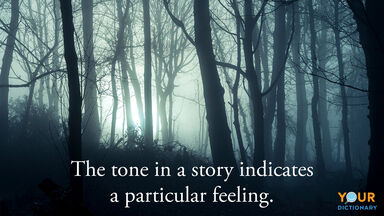 What Is Tone in Writing?

The tone in writing is not really any different than the tone of your voice. You know that sometimes it is not what you say but how you say it. It is the same with writing. Every adjective and adverb you use, your sentence structure and the imagery you use will show your tone. The definition of tone in literature is the way the author expresses their attitude through their writing.

The tone can change very quickly or may remain the same throughout the story. Tone is expressed by your use of syntax, your point of view, your diction, and the level of formality in your writing. Examples of tone in a story include just about any adjective you can imagine.

Conveying Tone in a Story

Tone in writing is conveyed by both the word choice and the narrator of the story. See a few different examples of tone in writing from a few master authors.

In Charlotte's Web by E. B. White, although the book is sad, the tone is one of peace and acceptance.

"But I feel peaceful. Your success in the ring this morning was, to a small degree, my success. Your future is assured. You will live, secure and safe, Wilbur. Nothing can harm you now. These autumn days will shorten and grow cold. The leaves will shake loose from the trees and fall. Christmas will come, and the snows of winter. You will live to enjoy the beauty of the frozen world, for you mean a great deal to Zuckerman and he will not harm you, ever. Winter will pass, the days will lengthen, the ice will melt in the pasture pond. The song sparrow will return and sing, the frogs will awake, the warm wind will blow again. All these sights and sounds and smells will be yours to enjoy, Wilbur-this lovely world, these precious days …"

In Hemingway's A Clean, Well-Lighted Place, the tone is calm and peaceful.

"It was very late and everyone had left the cafe except an old man who sat in the shadow the leaves of the tree made against the electric light. In the day time the street was dusty, but at night the dew settled the dust and the old man liked to sit late because he was deaf and now at night it was quiet and he felt the difference."

A River Runs Through It by Norman Maclean

In A River Runs Through It by Norman Maclean, loss is addressed with a kind of acceptance. The tone is wistful, yet peaceful and moving towards acceptance.

"This was the last fish we were ever to see Paul catch. My father and I talked about this moment several times later, and whatever our other feelings, we always felt it fitting that, when we saw him catch his last fish, we never saw the fish but only the artistry of the fisherman."

The School by Donald Barthelme

Consider the tone of The School by Donald Barthelme. Words like "death" and "depressing" set a negative or unhappy tone.

"And the trees all died. They were orange trees. I don't know why they died, they just died. Something wrong with the soil possibly or maybe the stuff we got from the nursery wasn't the best. We complained about it. So we've got thirty kids there, each kid had his or her own little tree to plant and we've got these thirty dead trees. All these kids looking at these little brown sticks, it was depressing."

In the following excerpt from Edgar Allan Poe's "The Tell-Tale Heart," notice the many adjectives and verbs that imply insane, nervous and guilty tones.

In A Tale of Two Cities by Charles Dickens, the tone could be said to be mysterious, secretive, ominous, or evil through the use of words like "clammy," "followed" and "unwholesome."

"There was a steaming mist in all the hollows, and it had roamed in its forlornness up the hill, like an evil spirit, seeking rest and finding none. A clammy and intensely cold mist, it made its slow way through the air in ripples that visibly followed and overspread one another, as the waves of an unwholesome sea might do. It was dense enough to shut out everything from the light of the coach-lamps but these its own workings, and a few yards of road; and the reek of the labouring horses steamed into it, as if they had made it all."

In addition to expressing emotion, the tone for something can vary based on whether it is casual or formal. Both types can convey a certain type of emotion, but it also works to set the mood of a piece of writing.

A casual tone is more laid back and relaxed. It's like talking to a friend. You can see this at work in this original example.

The way I look at it, someone needs to start doing something about disease. What's the big deal? People are dying. But the average person doesn't think twice about it until it affects them. Or someone they know.

A formal tone makes you want to straighten your back and stand at attention. It reminds you of the tone you might use with a superior or at work.

There was a delay in the start of the project, attributable to circumstances beyond the control of all relevant parties. Progress came to a standstill, and no one was prepared to undertake the assessment of the problem and determination of the solution.

There are as many examples of tone in a story as there are stars in the sky. Any adjective, adverb or even verb you can think of can help convey the tone in a story. Study other essential elements of a story to see how tone fits into the bigger picture.