Examples of Typology: Definition and Use Across Different Disciplines

What is typology? The term typology refers to studying, examining, classifying, or analyzing things or concepts according to different types or categories. Typology can be used across all industries and disciplines. A few examples of fields in which typology is used include theology, anthropology, archaeology, linguistics, psychology, politics, education, medicine, farming, and many others. 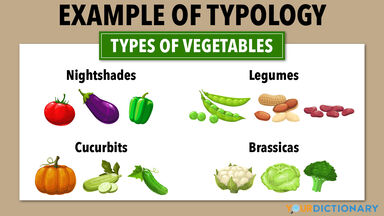 Before reviewing typology examples, it's important to really understand the definition of typology. Understanding what typology is will make it easier to understand how certain examples illustrate the concept. A typology is simply a means of classifying items, people or concepts by general type. The word typology is simply a scientific term for grouping things together based on similarities.

Examples of Typology in Many Fields

Since typology can be used in every field or industry, it's not surprising that there are many different typology examples. Some typologies are usually used by academic or professional researchers, but many others are used by ordinary people practicing their chosen profession or even in everyday life.

Typologies are very important to the field of anthropology. Anthropologists often classify civilizations and other groups of people by culture, beliefs or practices. They also use various traits to classify artifacts.

The evolution and nuances of language can be better understood when similar languages with common traits are grouped together. Grouping languages by typology makes comparisons more manageable than if one broadly attempted to compare and contrast all languages simultaneously.

Typologies are used to group living things for the purpose of biological study, as well as to make it easy for people to understand relationships and associations that exist among plants and animals that share traits in common.

Typologies are commonly used in the world of economics. Certain geographic areas and industries can be classified based on how certain factors impact their economic success, as well as by the impact they have on the economy.

In architecture, typology involves using traits of buildings or spaces in order to classify them, as well as how architectural work is performed.

Examples of Typology in Art

There are numerous examples of typology associated with religious texts such as the Holy Bible, as well as in various religions of the world. The way a person approaches religion can also be expressed as a typology.

Understanding typology is important if you wish to conduct academic research or applied research. It's also beneficial if you wish to use different systems of classification in order to understand how things relate to each other. To get a sense of how typology comes up in many fields of study, consider various natural ecosystem examples. Each category is a typology. Any time you group things together, such as organizing words into different parts of speech, you're using a typology.