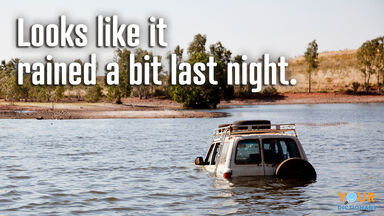 understatement vehicle in a flood
Advertisement

Understatements can be used for different purposes and outcomes. No matter what the type, the reason they are used is the same: to make something seem less than it really is. See the different types of understatement examples you might encounter.

A comedic understatement adds humor to an otherwise serious situation. For example, there is a hurricane at your vacation home and there is most likely severe damage to the house. You say, "At least the plants will get watered."

A modest understatement is used instead of bragging or boasting about something. For example, winning your first trophy and saying it was "not a big deal" when it really was a big deal.

A polite understatement can be used in difficult situations when you may disagree with someone's opinion but still want to remain polite. For example, when talking politics and you and a friend are on completely opposite sides, but you simply say, "I think our opinions are slightly different on this matter." Or, if someone asks you to describe someone who is very short, you say, "Well, he's not tall."

The Catcher in the Rye by J. D. Salinger

In J. D. Salinger’s The Catcher in the Rye, Holden Caulfield effectively uses understatement in his dialogue to calm the woman's concern over his leaving school.

“I have to have this operation. It isn’t very serious. I have this tiny little tumor on the brain.”

In Shakespeare's Romeo and Juliet, when Mercutio is stabbed by Tybalt, Mercutio definitely uses an understatement to talk about his wound.

Harry Potter and the Deathly Hallows by J. K. Rowling

Professor McGonagall is known for her dry humor and use of understatement in the Harry Potter series. You can see this in Harry Potter and the Deathly Hallows.

“'I think so,' said Professor McGonagall dryly, 'we teachers are rather good at magic, you know.'”

Fire and Ice by Robert Frost

Robert Frost's "Fire and Ice" short poem ironically downplays the end of the world through the use of understatement.

"Some say the world will end in fire,
Some say in ice.
From what I’ve tasted of desire
I hold with those who favor fire.
But if it had to perish twice,
I think I know enough of hate
To say that for destruction ice
Is also great
And would suffice."

As you can see, anything that is made less important than it really is can be identified as an understatement. Exaggeration or hyperbole and overstatements are the complete opposite, where something is blown out of proportion. Understatements are sometimes not well defined and are subtly said to another person out of rhetoric. Oftentimes, the response to one is "Well, that is an understatement!"