Examples of Utopia: Types and Features of Ideal Societies

Have you ever pictured the perfect world through the words of your favorite novel? Then you've thought about a utopia. This word actually came from literature when Sir Thomas More used the word utopia to describe the perfect island. Get a clear idea of what a utopia is and see several utopia examples. 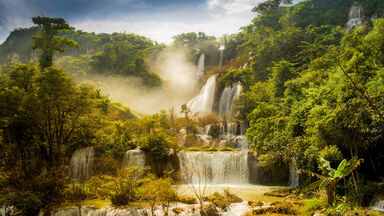 When you think of the perfect world, you might think of heaven or a world with no wars. Several writers and philosophers have tried to imagine the perfect world. But by definition, the term utopia refers to an ideal or place in which all aspects are perfect or nearly so.

So, where did utopia come from? Sir Thomas More created the concept name in 1516 as the title of his book, Utopia. Within his book, More created a fictional description of an island that had the qualities of perfection. Since then, many writers and philosophers have tried to create a utopian society.

However, most fictional utopias actually turn out to be a dystopia, an imaginary world with suffering and injustice. A prime example of a utopia that's actually a dystopia is seen in George Orwell's 1984. You can also view a dystopia in Aldous Huxley's Brave New World.

Examples of utopia, in various contexts, as represented through literature, art, popular culture, and other means include:

The term utopia was originally a description of a social environment and has manifested in many ways. The idea of "world peace" is considered utopian in nature, and United States communes were attempts at utopian ways of living. However, there are several different features of an ideal society.

In an ecological utopia, the society would work in harmony with the nature around them. Rather than producing waste and pollution, people would become one with nature to have ecological harmony.

Utopian idealism took off after the 18th century. Those seeking economic utopia are partially responsible for the development of commercialism and capitalism, although they were combined with some socialist characteristics in the early 19th century. Much of the work of Karl Marx and Friedrich Engels was working toward a self-sustaining utopian economy.

Religious utopias exist in concept, both as intra-religious ideals as well as inter-religious. In these types of societies, faith controls every aspect of a person's life, creating religious harmony. For example, the Amish community works towards religious utopia.

Scientific utopias pertain to the idea of perfection in terms of living standards. Means of attempting to achieve utopia through science include ideas that omit death and suffering from life or make the human condition perfect.

Scientific and technological utopias are oftentimes connected. Technological utopian lifestyles would be those that replace human needs or functions with technology in such a way that humans have a higher quality of life. An example of a technology utopia is Francis Bacon's New Atlantis.

Your Idea of a Utopian Society