Verbal irony is a figure of speech in which a speaker says one thing but means another. It comes in several forms and is used to bring humor to a situation, foreshadow events to come or introduce a sense of foreboding. Take a look at these examples of verbal irony and see how many you could introduce into your daily dialogue. 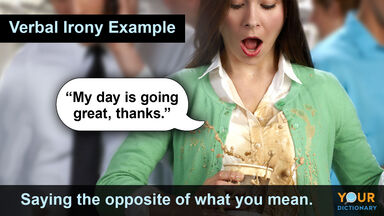 Verbal irony is used in a variety of circumstances. We may stumble upon it in general conversation, the media and in literature. Verbal irony often brings levity to a situation, exposes double entendres or pokes fun at a situation.

Many people believe verbal irony to be synonymous with sarcasm, but sarcasm is only one of the common types of verbal irony. It appears in four basic forms:

Like the other major types of irony, verbal irony plays with the listener's expectations. You'll find examples of verbal irony everywhere, from children's movies to classic literature to everyday situations.

Verbal Irony in Literature and the Media

Whenever a character says something that makes you smirk or chuckle, they're probably using verbal irony. It's the difference between what they're saying and what they mean that brings humor to a situation — even to a dark situation.

You don't have to be a world-class playwright or author to engage in a little bit of verbal irony. Let's take a look at a few more examples of verbal irony that could play out in everyday life.

Verbal irony can serve to provide levity to a new situation, poke a little bit of fun, or even subtly foreshadow a very ironic future, such as Mr. Darcy’s case. This type of dialogue is another feather in your writing cap, so spread your wings and fly to newly formed ironic heights. While you’re there, check out some examples of situational irony. You can then contrast both concepts to these examples of dramatic irony. Why not explore a little more and see which form you’d like to include in your next short story or poem?