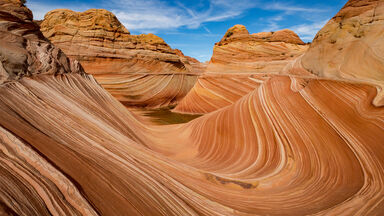 The Wave sandstone in Arizona example of Wind Erosion
Advertisement

What Is Wind Erosion?

When the wind moves the soil from one area to another, this is called wind erosion. However, the term wind erosion actually refers to the damage of land due to wind removing soil from an area. Most often, wind erosion occurs on flat land in dry or sandy areas like the desert.

You can find various examples of wind erosion all over the world. Check out a few of the interesting ones.

How Does Wind Cause Erosion?

The wind causes erosion by moving the dirt around. Therefore, wind erosion can happen anywhere and any time the wind blows. Wind erosion typically occurs in any area where the soil or sand is not compacted or is of a finely granulated nature.

Not only does wind erosion damage the land by drying out the soil and reducing the nutrients of the land, but it can also cause air pollution. Enveloping crops, covering highways, and invading homes, the sand, dust and dirt created from wind erosion can impact plant and human life in numerous ways.

How Wind Erosion Affects an Area

When these particles move along the ground, they create two different effects. These effects are called deflation or abrasion.

When the wind moves loose soil and dirt particles, this would be an example of deflation. When airborne particles cause landmass to wear away or erode, on the other hand, this is an example of abrasion.

The Effects of Wind Erosion

It's important to pay attention to wind erosion because it can cause devastation to an area. For example, it can cause:

While wind erosion will happen, there are a few things you can do to help keep it at bay. These include:

Now you have seen lots of different examples of wind erosion, and you can better recognize this phenomenon when it occurs. Since you have a clear grasp of wind erosion, you can check out what ice erosion looks like.