Examples of Word Salad: Understanding the Use of Random Words

The term word salad refers to random words or phrases linked together in an often unintelligible manner. Often, a listener is unable to understand the meaning or purpose of the phrase. Mental health issues can often be the cause of disorganized speech such as word salad. Review a selection of word salad examples to better understand what the phrase word salad means. 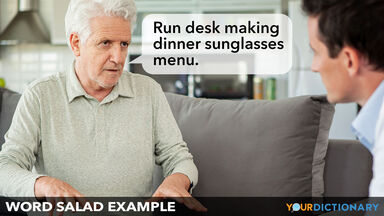 Conditions That Lead to Speaking a Word Salad

People who can't help but speak in word salad have medical or psychological conditions that impair their ability to speak properly. This is part of the official word salad definition. This phrase is used to describe incoherent, nonsensical speech linked with certain health conditions, some of which are mental health disorders.

Word salad is often associated with Alzheimer's disease and strokes, but these are not the only conditions that can lead to unintelligible speech. People with a wide variety of medical conditions are known to utter strings of words that do not convey coherent information.

While people who utter word salad examples may intend to convey meaning, the words they put together do not actually form complete sentences. People who speak this way due to medical conditions cannot help it. They most likely know what they want to say but cannot form coherent sentences to communicate what they wish to share. Review these examples for a better understanding of what is a word salad.

Word Salad on TV and in Other Contexts

The phrase word salad is sometimes used in a way other than its official psychological definition. It has come to be used in an informal, slang-like way to refer to what is perceived as nonsense, such as rambling, illogical or meaningless statements. The term is also sometimes used to denigrate political speeches, slogans or catchphrases.

It's important to realize that the true definition of word salad is linked to serious medical conditions that keep a person from being able to communicate. It's not something to be taken lightly or to laugh about. Now that you are aware of this phenomenon that's often linked to psychological disorders, take the time to learn more about this field of study. Start by exploring some key psychology terms and their meanings.