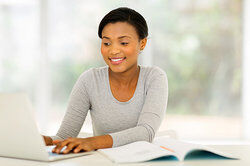 The formats shown below for works cited pages reflect the MLA (Modern Language Association) style. This style is widely used by schools and colleges, especially in the Humanities departments.

Follow the punctuation as noted in the list. For example, there are periods after the author and the title; however, separate the rest with commas. Add a final period at the end.

MLA 8 no longer requires the medium in each entry. Including an access date is optional, but recommended if an article is undated. Use a hanging indent for entries of two or more lines.

In a Works Cited page, the header should be centered. It should start on a new page, be six spaces from the top, and be numbered consecutively. In other words, if your paper is eight pages long, the Works Cited page will be page nine.

The heading needs to have a double space below it. Entries are in alphabetical order, are not numbered, and are flush with the left margin. The second line and subsequent lines need to be indented five spaces and all lines are doubled spaced. (The examples here are not indented or double spaced as they would be in your paper.)

Cook, Claire Kehrwald. Line by Line: How to Improve Your Own Writing. Houghton Mifflin, 1985.

Greenbaum, Sidney, and Randolph Quirk. A Student’s Grammar of the English Language. Longman, 1990.

These examples of works cited pages should help you see how to format your MLA-style page. Here are three basic rules for the format of the entries:

Examples for Citing Other Sources

Following are examples to further explain citing sources that are not covered by the basic rules:

Book with three or more authors

Difference Between Works Cited and References

As mentioned, Works Cited and References pages are similar but reference page entries are from the APA (American Psychological Association) style, which is used for papers in the social sciences. APA follows the author-date style. Only the last name and first initial is included in the author’s name. Only the first word (or proper names) are capitalized in title and subtitle.

Fouts, R. (1997). Next of kin: What chimpanzees taught me about who we are. New York: William Morrow.

Remember, a Works Cited page is written in MLA format and lists every work that you cited in your paper. It does not include all the sources you used in your research. The referenced works are listed alphabetically by the author’s last name or, if there's no author name, by the first word of the title.

If you're worried about plagiarising a source in your paper read these Examples of Plagiarism so you know how to avoid it.