Xerophytes are plant species that have evolved to survive in dry regions. Xerophytes have adapted to be able to hold onto large amounts of water for a long period of time or limit water loss. Without these capabilities, the plants would die, as their arid environment does not provide enough water to sustain life. Keep reading for xerophytes examples all over the world. 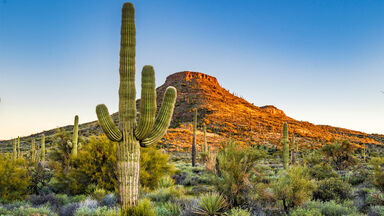 What Is a Xerophyte?

Xerophyte is a Greek word that means "dry plant." They are the opposite of hydrophytes, which are plants that only grow completely or partly in the water. Xerophytes tend to share some of the following attributes:

There are examples of xerophytes in many different biomes, especially in deserts around the world where rain is scarce. Xerophytes fall into three main categories: succulents, non-succulent perennials and ephemerals.

When you think of the desert, you probably think of cacti. Cacti are one type of succulent — xerophytic plants that survive in arid environments by storing water in their stems, roots or leaves.

Common succulents around the world include:

Like succulents, non-succulent perennials survive for multiple growing seasons. Unlike succulents, these "actual xerophytes" use root growth and elongated root systems to get more water from the soil rather than storing water in their stems and leaves.

Examples of non-succulent perennials include:

Have you ever wondered why springtime in the desert and chaparral biomes is full of blooming wildflowers? They're known as ephemerals — xerophytes that have a very short maturation and germination period (around two months). Just a small amount of rainfall is all these flowers need to bloom and reproduce for their entire lifetime.

Desert ephemerals include wildflowers and weeds, such as:

Xerophytes live in areas with very little water in the soil and low amounts of rainfall. While they are commonly found in deserts, xerophytic plants may also grow in salt marshes, frozen land masses like the Arctic and Antarctic, or tropical forests.

Desert regions where you can find xerophytes include:

The next time you're in a hot, dry environment, take a look around you. The plant life around you is probably thriving without water — even though it may not look like it! If you're interested in other ways plants have evolved for survival, take a look at some examples of plant adaptations in different environments.