Examples of Youth Culture: Trends of the Past & Today

The term youth culture refers to the ways that teenagers conduct their lives. Youth culture can pertain to interests, styles, behaviors, music, beliefs, vocabulary, clothes, sports and dating. The concept behind youth culture is that adolescents are a subculture with norms, mores, behaviors, and values that differ from the main culture of older generations within society. 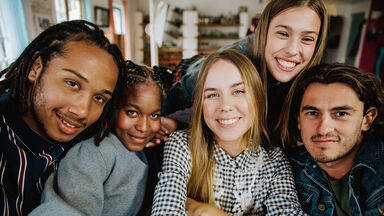 Actions and attitudes attributed largely to the youth of a particular time period can be described as youth culture. There are many examples of youth culture and subcultures in society.

Personal appearance is one of the most visible indicators of teen culture. Looking at how young people dress and groom themselves is a powerful indicator of the current state of youth culture.

Youth culture can also be seen in terms of the type of entertainment that is popular among young people.

Each generation of youth tends to engage in a bit of rebellion against societal norms established by previous generations.

Fitting in With Peers

For each generation of youth, peer pressure can have a very powerful impact on behavior. Youth sometimes change their perceptions or behaviors as a way of fitting in with other people in their age group.

Specifically defining what youth culture is can be a bit difficult because it is a moving target. Each generation will have its own unique youth culture that is reflective of youth’s lives and the times, though it's important to avoid stereotyping people based on their generation. There are many groups within any culture, with different preferences, ideas and goals.

Youth culture truly developed in the 20th century when it became more common for adolescents to gather together than in past centuries. Prior to this time, many adolescents spent a majority of time with adults or child siblings. Compulsory schooling and other societal changes made the joint socialization of adolescents more prevalent.

To better understand youth culture, consider exploring culture in a larger context. Start by reviewing some examples of culture overall, which will provide a different perspective than focusing on a particular age group. From there, you may also want to explore some subculture examples.