Examples of Zeugma: A Unique Figure of Speech Explained

The zeugma is an interesting literary device that uses one word to refer to two or more different things in more than one way. Zeugmas will either confuse the reader or inspire them to think more deeply, but if they're well written they will achieve the latter. Learn more about zeugmas through several examples. 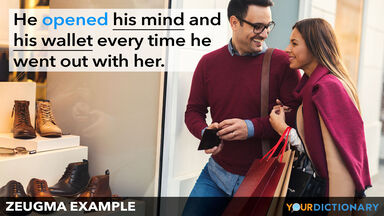 In grammatical terms, a zeugma is when a verb or adjective modifies two or more nouns to form one idea. Essentially, one word is applied to two or more other words in different ways. To get a better understanding of zeugmas, take a look at this famous zeugma example from Star Trek: The Next Generation.

"You are free to execute your laws, and your citizens, as you see fit."

As you can see, the word execute applies to both laws and citizens. So, in essence, they are saying, "You are free to execute your laws and execute your citizens." However, using the zeugma simplifies the sentence and has a shocking effect. Given the zeugma's risky role in a sentence, it's best to tread lightly when adding this kind of flavor to your writing.

Zeugma can be used to create drama, add emotion or produce a level of shock value. While there can still be an underlying sense of confusion, generally, a zeugma is used purposely.

All of these examples serve a particular purpose. Look at the example, "The storm sank my boat and my dreams." This zeugma translates to a more powerful meaning. Now, the feelings of sadness over the loss of a treasured boat and lifelong dream are more pronounced than something literal like, "My boat sank in the storm. I couldn't realize my dreams."

Writers like to use zeugma to add interest to their prose. See a few famous examples of zeugma found in literature.

Jane Austen is known for her memorable, timeless stories. But she added a few zeugma examples into her work too.

"Yet time and her aunt moved slowly — and her patience and her ideas were nearly worn our before the tete-a-tete was over."

The Adventures of Tom Sawyer by Mark Twain

When it comes to purposeful prose, Mark Twain was a master. See how he used zeugma in this passage.

"They tugged and tore at each other's hair and clothes, punched and scratched each other's nose, and covered themselves with dust and glory."

The Things They Carried by Tim O'Brien

You can see the weight of the task ahead of the man through the use of this zeugma.

"He carried a strobe light and the responsibility for the lives of his men."

Zeugmas aren’t all meant to be taken literally. Sometimes they can be humorous or even ridiculous, as seen in this Dickensian example where cudgeling means "to beat with a short stick":

"He was alternately cudgeling his brains and his donkey."

Sometimes, when people try to use a zeugma in their writing, they find themselves entering misplaced modifier territory. That is, it's apparent something is being modified, but it's unclear what that is. Therefore, it's important to still follow the rules of sentence structure. For example:

She dug for gold and praise in the ground.

The modifier "in the ground" goes with gold, as you do not find praise in the ground. This attempt at zeugma can be easily corrected and clarified: "She dug for gold in the ground and for praise." It's not quite the same zinger, but isn't this the beauty of writing? Sometimes, it's a matter of trial and error. There's a fine line between clear-cut prose and fanciful flourishes.

Not Just a Figure of Speech

Zeugmas can be dramatic, fun and even humorous. As long as the reader can deduce your meaning, you could be well on your way to producing a clever one-liner. If you find zeugmas entertaining, have some fun with other examples of rhetorical devices, including the fan-favorites alliteration and evocative epithet.