Poets are charged with creating works that are highly evocative. They use images that demonstrate emotions and ideas, either literally or metaphorically. Creative language is one of the tools that the best poets employ to get a point across. Among the most evocative choices is the use of onomatopoeia. Enjoy some examples of onomatopoeia poems. 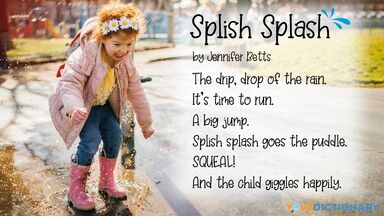 Onomatopoeia is often used by poets because it allows the reader to visualize the scene by creating a multi-sensory experience, all with words. Readers don't just picture the scene, they hear the sounds in nature or feel the chill in the air — as these examples, from the classics to modern verse poems with onomatopoeia, demonstrate.

Alfred Lord Tennyson was one of the most famous poets of the Victorian era, succeeding the Romantic poet William Wordsworth as England's poet laureate. Lord Tennyson was widely known for his particularly effective use of language, which conjured up whimsy, mystery and even sadness. His medievalist poem, "Morte D'Arthur," chronicles the death of the legendary King Arthur and includes onomatopoeia.

“And answer made the bold Sir Bedivere:
"I heard the ripple washing in the reeds,
And the wild water lapping on the crag."

The Bells by Edgar Allan Poe

Around the same time Tennyson wrote poetry in England, Edgar Allan Poe was writing in America. Poe's poetry is always filled with sensory detail, quite often unsettling and frightening. Here's an excerpt from "The Bells."

“Oh, the bells, bells, bells!
What a tale their terror tells
Of Despair!
How they clang, and clash, and roar!
What a horror they outpour
On the bosom of the palpitating air!
Yet the ear it fully knows,
By the twanging,
And the clanging,
How the danger ebbs and flows;
Yet the ear distinctly tells,
In the jangling,
And the wrangling.”

The Pied Piper of Hamelin by Robert Browning

A popular fairy tale widely believed to be true is the "Pied Piper of Hamelin." The piper supposedly led children away from their families in Germany during the Middle Ages. Robert Browning, a poet who popularized the dramatic monologue, wrote an onomatopoeia poem about the pied piper.

“There was a rustling that seemed like a bustling
Of merry crowds justling at pitching and hustling,
Small feet were pattering, wooden shoes clattering,
Little hands clapping and little tongues chattering,
And, like fowls in a farm-yard when barley is scattering…”

Cynthia in the Snow by Gwendolyn Brooks

Gwendolyn Brooks was an American author who wrote during the years of the civil rights movement. As an African American woman, Brooks experienced many of the trials and tribulations associated with being black during a tumultuous time in the history of the United States. She often poured these experiences into her poetry, which used sensory language to depict a variety of different ideas, scenarios and stories. Brooks' poem "Cynthia in the Snow" uses onomatopoeia to depict a girl's thoughts about the effects of snow.

“It SHUSHES
It hushes
The loudness in the road.
It flitter-twitters,
And laughs away from me.
It laughs a lovely whiteness,
And whitely whirls away,
To be
Some otherwhere,
Still white as milk or shirts,
So beautiful it hurts.”

The Honky Tonk in Cleveland, Ohio by Carl Sandburg

Carl Sandburg was so poor as a child, he had to drop out of school at the age of 13 to help support his family. Sandburg worked odd jobs until he was finally able to resume his education. Certainly, he rebounded because he went on to write volumes of poetry, two of which received the Pulitzer Prize. This exciting poem is filled with onomatopoeia that takes us right into a Honky Tonk in Cleveland, Ohio as this excerpt shows.

“It's a jazz affair, drum crashes and cornet razzes.
The trombone pony neighs and the tuba jackass snorts.
The banjo tickles and titters too awful.”

Looking for a fun poem including onomatopoeia? Victoria Reome's "Rain Dance Poem" is not only a salute to poetry, but it's also ripe with onomatopoeia as you'll see in this extract.

Are you looking for a silly children’s onomatopoeia example? Look no further than Jaymie Gerard’s “Piddle-Paddle” poem.

Another fun onomatopoeia example designed to satisfy your senses is “Running Water” by Lee Emmett. This poem is designed to have you imagining all the sounds of the water and music.

Feel the pitter-patter of the rain and the clip-clop of heels in Thomas Dodd’s “Storm.” You can use all your senses as you imagine these words.

Sound of Water and Liquid by Unknown Author

You don’t just find onomatopoeia in English. Japanese poems like this unique one called the “Sounds of Water and Liquid” use it too.

While famous poets often have fun with onomatopoeia, you can play with it yourself. Check out these unique poems.

There is nothing more fun than running in the rain. See and hear this pastime in your mind with "Splish Splash."

The drip, drop of the rain.
It’s time to run.
A big jump.
Splish splash goes the puddle.
SQUEAL!
And the child giggles happily.

Beauty of the Wind by Jennifer Betts

There is nothing better than a warm summer breeze blowing against your face as you breathe in the beautiful aroma of nature around you.

The swish of the leaves.
It dances on the trees.
Closing my eyes softly.
The warm wind tickles my cheek swiftly.
Leaves rustle and crackle in the air.
If only you were there.

What do you think? Are you ready to try your hand at an onomatopoeia poem? Or any type of poem for that matter? Enjoy this breakdown of the different types of poems. Then, then you're ready to spread your wings, review these writing tips and let your creativity fly.