An exclamatory sentence makes a statement that conveys strong emotion or excitement. Placing that tiny stripe above a period at the end of a sentence can really rock the boat! For example:

“I got the concert tickets!”

Have you ever had a text conversation go something like that? Your friend is trying to convey excitement and instead of throwing in some emojis, she uses exclamation marks. No big deal, but it can come across as a different kind of emotion, like anger or frustration. 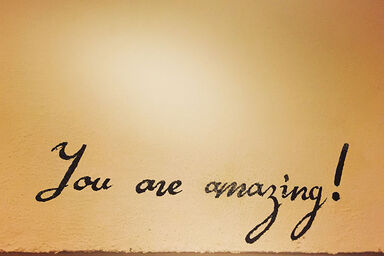 exclamatory sentence: You are amazing!

Your tone, the emphasis you place on certain words, and your inflection can all change the meaning — and possibly the urgency — of your sentence.

Let's take a look at some exclamatory sentence examples. We've broken them up into their most common categories.

Exclamatory sentences are so powerful they can stand alone. For example:

In these instances, you don't have to divide the sentiment into two separate sentences. Instead, insert a comma where the speaker would naturally pause and then finish off with that indicator of excitement, the exclamation mark.

Exclamatory Sentences That Begin with "What:"

Exclamatory Sentences That Begin with "How:"

He's such a kind soul!
That's such a gorgeous ring!
Your puppy is such a cutie!
You’re such a liar!

In the end, it's best to leave exclamatory sentences for the lighter side of life. It's okay to create a casual blog post with an exclamatory sentence or two. A script for an episode of Friends will be full of exclamatory sentences — and that's why we loved it so much. However, a paper focusing on the benefits of herbal medicine should be far less driven by exclamations. Let your writing speak for itself. Choose clear, concise tones and avoid the urge to place that stripe above your periods (!).