When you write an expository essay, you are explaining something to your audience. It is different from technical writing (also known as process essays), which explains how to do or use a product. Expository writing is also different from argumentative writing, which is meant to convince the audience to agree with the writer’s perspective. News articles are good examples of expository writing, as are any pieces that focus on the 5 Ws (who, what, where, when, and why). 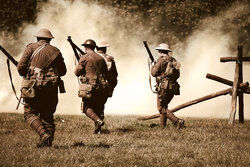 Expository essays typically follow the standard five-paragraph format. After you outline the three main points of your essay, you’re ready to start writing. Your essay should include these sections:

It’s helpful to see the format and structure of expository essays at different levels. Here is one example of how a middle schooler may write a compare and contrast essay about two characters in J.K. Rowling’s Harry Potter and the Sorcerer’s Stone.

Harry and Draco: Not As Different as They Seem

Whether you’re sorted into Gryffindor, Hufflepuff, Ravenclaw, or Slytherin, your background and behavior tells a lot about who you are. Harry Potter and Draco Malfoy from Harry Potter and the Sorcerer’s Stone are in opposite houses, and at times they seem like opposite characters. Even though Harry and Draco appear different in every way, readers can see how alike these two rivals really are.

The first difference between Harry and Draco is their upbringing. Harry was raised by Muggles (non-magical people), while Draco comes from an elite wizarding family that hates Muggles. When the boys meet for the first time, Draco talks about whether Muggle-born wizards should even attend Hogwarts School of Witchcraft and Wizardry:

“I really don’t think they should let the other sort in, do you? They’re just not the same, they’ve never been brought up to know our ways. Some of them have never even heard of Hogwarts until they get the letter, imagine. I think they should keep it in the old wizarding families.” (Rowling 61)

Harry doesn’t respond to Draco’s comment. Even though Harry is from an “old wizarding family” like Draco’s, he is one of those people who had not heard of Hogwarts because of his Muggle upbringing. Draco’s negative opinion about families he believes to be “lower” than his family creates his first conflict with Harry.

The way that Draco and Harry treat people from other backgrounds is another difference between them. On the Hogwarts Express, Harry and Draco meet again, this time with Ron Weasley. Harry makes friends with Ron, while Draco immediately insults him.

“You’ll soon find out some wizarding families are much better than others, Potter. You don’t want to go making friends with the wrong sort. I can help you there.”

[Draco] held out his hand to shake Harry’s, but Harry didn’t take it.

“I think I can tell who the wrong sort are for myself, thanks,” he said coolly. (Rowling 81)

Harry won’t join in with Draco’s put-down and even refuses to shake his hand. Harry is the kind of person who stands up for people, while Draco tears them down. But even though Harry and Draco are early enemies, their character traits can be quite similar, too.

They are both competitive and passionate about their houses. Both boys are even willing to break Hogwarts rules for their own purposes. When Hagrid, the school groundskeeper, has an illegal dragon that is about to hatch, Harry convinces his friends to break the rules and see it.

“Hermione, how many times in our lives are we going to see a dragon hatching?” (said Harry.)

“We’ve got lessons, we’ll get into trouble, and that’s nothing to what Hagrid’s going to be in when someone finds out what he’s doing.” (Rowling 171)

Harry bolted to the door and looked out. Even at a distance there was no mistaking him. Malfoy had seen the dragon. (Rowling 172)

Harry broke the rules to protect Hagrid, and Draco broke the rules to get Harry in trouble. Their motivations are different, but neither character seems to care too much about Hogwarts rules. Later on, they both get detention at Hogwarts for different reasons, demonstrating that their behavior is treated the same way.

Even though Harry and Draco are enemies throughout the book, they are not completely different. Their similarities help them grow, and their differences help them make choices that are right for their character. Their houses may be opposites, but their characters certainly aren’t.

Read another example of an expository essay. This Cause and Effect essay about World War I is from the perspective of a high school student.

The Cause and Lasting Effects of World War I

It’s almost impossible to imagine a war that involved 32 countries, 40 million fatalities, and 186 billion dollars. But World War I, also known as The Great War or The War to End All Wars, ended up being one of the costliest global conflicts in terms of both funds and human lives. While it’s difficult to understand the magnitude of World War I, it’s even harder to comprehend how the actions of Gavrilo Princip, a Bosnian assassin, could trigger such an international chain event.

Though there were many underlying causes to World War I, the events of June 28, 1914 are considered the inciting incident. Princip’s assassination of Archduke Franz Ferdinand and his wife Sophie in Sarajevo was designed to influence the creation of Yugoslavia. As a result, Austria-Hungary declared war on Serbia one month later during the July Crisis.

Though Serbia effectively accepted all of Austria’s demands except for one, the Austrian government broke diplomatic relations with the other country on July 25 and went ahead with military preparedness measures. (“Austria-Hungary declares war on Serbia,” History.com)

When Austria-Hungary entered the war, Germany was immediately involved. Serbia’s ally, Russia, posed a significant threat to Austria-Hungary’s objective. What could have been a small-scale skirmish turned into a larger operation when Germany then declared war on Russia.

His Majesty the Emperor, my august Sovereign, in the name of the German Empire, accepts the challenge, and considers himself at war with Russia.” (“The German Declaration of War on Russia,” wwi.lib.byu.edu/)

By bringing Russia to the war, Germany found itself at war with Russia’s ally, France. Soon after, Germany began “The Rape of Belgium,” in which it illegally invaded Belgium in an attempt to bring its troops to Paris. The atrocity quickly attracted international attention, including that of Britain, who declared war on Germany on August 4, 1914. Britain’s declaration of war is considered the true beginning of World War I. The assassination that caused the initial conflict was left behind long ago, as its effects were rapidly escalating long past that fateful day.

The effects of Princip’s actions quickly ricocheted around the world. The Ottoman Empire entered the war after making a secret alliance with Germany, and Montenegro and France declared war against Austria-Hungary. The Battle of the Marne in 1914 between Germany, France, Russia, and Britain began four years of constant trench warfare. Soldiers suffered from the advances of chemical warfare, as detailed by nurse Vera Brittain in her 1933 memoir Testament of Youth.

“I wish those people who talk about going on with this war whatever it costs could see the soldiers suffering from mustard gas poisoning. Great mustard-coloured blisters, blind eyes, all sticky and stuck together, always fighting for breath, with voices a mere whisper, saying that their throats are closing and they know they will choke.” (Brittain)

Operations continued in the Pacific as Japan, New Zealand, and South Africa declared war against Germany. Italy, having already proclaimed their neutrality, declared war on Germany after the Treaty of London. In 1917, Germany tried to coerce Mexico to declare war against America, leading President Woodrow Wilson to finally bring the United States into the strife.

But the right is more precious than peace, and we shall fight for the things which we have always carried nearest our hearts—democracy. . . . .” (Wilson)

Immediately following the United States’ entrance into the war was Cuba and Panama, who declared war on Germany the next day. Greece followed suit in June 1917, followed closely by Liberia and China. Over the next year, countless battles and operations pushed boundaries and lost hundreds of thousands of soldiers to the cause. The final offensive of World War I, the Hundred Days Offensive, led Germany to the brink of defeat. After Germany signed the Armistice of Compiègne on November 11, 1918, the fighting was officially over – but the effects of the war were just beginning.

World War I may seem like it took place over four very busy years, but the effects of the international strife would come to define the 21st century. By the time the Paris Peace Conference began in January 1919, Germany’s economy and morale had plummeted. They had fought against nearly 30 countries and had come close to complete destruction, only to feel cheated by the Versailles Treaty.

The social and economic upheaval that followed World War I gave rise to many radical right wing parties in Weimar Germany. The harsh provisions of the Treaty of Versailles led many in the general population to believe that Germany had been "stabbed in the back" by the "November criminals." (“WWI: Aftermath,” encyclopedia.ushmm.org/).

The discouraged nation was resistant to the provisions of the treaty and to their new democratic rule. Many German citizens longed for more authoritarian rule as they’d had prior to World War I. A ruined economy led to hyperinflation, which made Germany fearful of Communism as well. Adolf Hitler, an Austrian extremist and leader of the Nazi Party, became a welcome voice in right-wing nationalist politics.

Beyond Marxism he believed the greatest enemy of all to be the Jew, who was for Hitler the incarnation of evil. (“Rise To Power,” britannica.com)

Hitler’s leadership in the years following World War I was a direct result of the war’s events. The next global crisis, World War II, would result in atrocities far beyond the scope of its predecessor. The world would spend the second half of the 20th century recovering from the enormous costs of both of these wars.

One assassin on an ordinary day in 1914 ended up starting an unfathomable chain of events. The wars that resulted would define an entire century, several generations, and countless government actions. It’s important to consider the effects of any action, political or not, to decide whether it’s the best path to take.

Need some ideas to get started on your expository essay? Check out a list of 100 writing prompts for middle school students. You can also find some writing strategy tips or more examples of informative essays to get your creative juices going.