Fact vs. Opinion: Simple Examples to Show the Difference 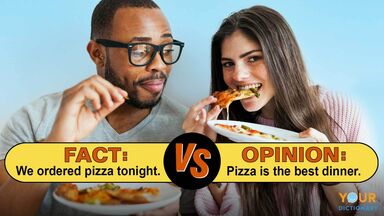 A fact is an objective piece of information that can be proven true or false. It can be verified with more than one piece of reliable evidence. You'll find facts in science, math, history, and everyday life. Here are some verifiable facts that are not up for debate because they can be proven with evidence.

You Need Oxygen to Survive

There's an easy way to prove this fact right: if you hold your breath, what happens? When you can't breathe, your heart has no oxygenated blood to pump, and your brain cells begin to die. Depriving a living thing of oxygen results in its death.

The Capital of Mexico is Mexico City

You can prove that the capital of Mexico is Mexico City by consulting any number of resources, including maps, encyclopedias and Mexican officials themselves. While it wasn't always called Mexico City (it was once the Aztec capital of Tenochtitlán), it is currently the country's capital.

Verifying that people keep dogs as pets is as simple as looking around your neighborhood — or maybe even your own house! There's nothing opinionated about the fact that some people have pet dogs.

Valentine's Day Is on February 14th

Look at your nearest calendar. What's marked for February 14th? Valentine's Day, the holiday that celebrates love and romance, is likely written into that square. If verifying the information on your calendar isn't enough, try looking up the history of the holiday.

More Than 70% of Earth's Surface is Ocean

Our understanding that ocean covers over 70% of Earth's surface isn't just a guess or hypothesis. It's compiled from the studies of explorers, cartographers, geographers, geologists, marine biologists, and more scientists over many millennia. We can state this finding as a fact because it has been proven over and over again.

History can be a tricky subject because it's difficult to find purely objective facts. As they say, history is written by the winners. However, it's difficult to argue with recorded historical events such as the surrender of Confederate General Robert E. Lee on April 9, 1865. No matter what your opinions are about the American Civil War, it's easy to prove that this event happened, making the Union Army victorious.

If you doubt a scientific fact, the scientific method is here to prove it for you. Enough scientists have tested the temperature at which water freezes, and have determined that the answer is 0 degrees Celsius (or 32 degrees Fahrenheit). If you have any doubt, look outside during winter when it gets that cold. You're likely to see some frozen water!

Women Were Given the Right to Vote in 1920

Voting rights are another area where people have a lot of opinions. But no one can argue with the existence of the 19th Amendment in the United States Constitution. It was ratified in 1920, giving women the right to vote.

Unlike facts, opinions can't be verified. They can be supported by evidence as in persuasive writing, but don't need to be. Anyone can have any opinion about anything because it doesn't need to be based in reality. Take the facts listed above and see how they are different as opinion statements.

Oxygen Is the Most Important Element

You could argue that because we need oxygen to survive (a fact), that it's the most important element. But that's your opinion. Someone else could argue that carbon is the most important element because organic compounds would not exist without it. Others might claim that hydrogen is just as important as oxygen. You can support all these opinions with evidence, but that doesn't make them facts.

Mexico City Is the Best City in Mexico

Saying that something is "the best" is always an opinion statement — even when you're sure most people would agree with you. Mexico City is the capital of Mexico and that's a fact, but deciding whether it's the best city in Mexico is a matter of opinion.

This is a popular opinion, but that doesn't mean it's a fact. Some may argue that dogs are terrible pets based on their personal experience. Others may claim that dogs are fine, but cats are better. Again, there's no way to validate this opinion.

Valentine's Day Is the Worst Holiday

The date of Valentine's Day is a fact, but how you feel about it is an opinion. People use anecdotes and personal stories to form opinions such as whether a holiday is the "best" or "worst" holiday.

We Should Use Ocean Water for Drinking

This opinion would make a great topic for an argument essay, but in the end, it's someone's personal opinion. They can use lots of evidence to back up this idea, including the value of desalinating water to make it suitable for drinking. However, it's still not a verifiable fact.

The Union Fought Better During the Civil War

The result of the Civil War was a Union victory — but did they fight better than the Confederacy? Many might say that the proof is in the results, as the Union did win. Others may claim that the Confederacy won more battles and gained more land in the first few years of the war, and therefore fought more effectively. It depends on your perspective, what evidence you're using and what you're trying to argue.

0 Degrees Celsius Is Too Cold

How cold is too cold? The answer will vary because everyone grows up with different experiences. People who live in warmer areas may believe that 0 degrees Celsius is simply too cold, while those who live in snowy or freezing climates may think that 0 degrees is perfectly enjoyable. You can't argue that water freezes at 0 degrees, because it does, but you can absolutely argue whether you like that weather or not.

Women Should Be Allowed to Vote

Sometimes an opinion is so popular that people confuse it for fact. However, believing that women should be allowed to vote is just that: a belief and an opinion. Backing up these opinions through legislature and Constitional amendments ensures that a country's values are protected against changing minds or movements.

Now that you know the difference between facts and opinions, how can you easily tell which is which? Keep an eye out for these fact and opinion signal words, which can quickly tell you what type of statement you are reading or hearing.

It gets tricky when people use fact signal words to pretend that their opinions are facts. That's when common sense comes in. If you can't prove or verify a statement, it can't be a fact.

The next time you're reading an article or watching the news, you'll be more prepared to tell whether you're hearing a fact or opinion. But don't let your own confirmation bias convince you that a convenient opinion is a proven fact. Use these fact and opinion worksheets to challenge yourself or your students when it comes to telling fact from opinion.