A false analogy is a type of informal fallacy. It states that since Item A and Item B both have Quality X in common, they must also have Quality Y in common. For example, say Joan and Mary both drive pickup trucks. Since Joan is a teacher, Mary must also be a teacher. This is flawed reasoning! As we explore the false analogy examples below, you’ll see they’re often presented in the form of a simile or metaphor. 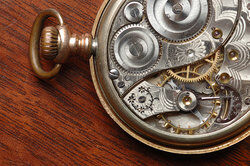 A pocket watch is complex, and it’s clear that it must have been designed intelligently by a watchmaker. Living beings and the world are similarly complex. Thus, they must also be the product of intelligent design.

Famously presented by English clergyman and philosopher William Paley in 1802, the watchmaker argument (sometimes called the watchmaker analogy) is used to support arguments for the existence of God. The argument asserts that since the world is so complex, it must have been designed by an intelligent being, just as a watch is designed by a watchmaker.

This is an example of a false analogy. Just because something is complex doesn’t necessarily mean that some higher being must have designed it. Richard Dawkins refuted this faulty analogy in his book, The Blind Watchmaker, in 1986. (It’s important to note that refuting this argument doesn’t necessarily refute the existence of God. That’s a whole other argument!)

Payday loan and credit card companies are just like opportunistic vultures. They’ll always strike at victims when they’re at their weakest.

Many people have vilified the finance industry, particularly when it comes to credit cards and short-term loans, saying that these companies are unfairly taking advantage of their customers (even the government has warned against their predatory tactics) as they tend to target students or people with poor credit.

It’s not completely accurate, though, to equate credit card companies with vultures feeding on carrion in the middle of the desert. The scavenging birds are doing what they have to do to survive. A big bank’s profiteering practices aren’t exactly the same thing.

While it can be inspiring and uplifting to dream big dreams, the America that put Buzz Aldrin and Neil Armstrong on the moon in 1969 is not the same one that exists in more than 50 years later. Innumerable other factors are involved, both domestically and internationally, that play into whether the United States wants to pursue a manned mission to Mars. For starters, the private industry -- led by companies like SpaceX and Blue Horizon -- plays a much bigger role in space exploration today than it did in the 1960s.

Under the Trump administration, the unemployment rate in America is the lowest it has been in 20 years. The real median household income is also at a 20-year high.

Taken purely at face value, this statement is not an example of “fake news.” The way it is presented, though, can be misleading, as it implies that President Trump is responsible for these changes in unemployment and household income.

The Trump presidency is taking place at the same time as these 20-year highs and lows. This doesn’t necessarily imply a causal relationship. Perhaps the trend was already leaning in that direction. This is a great illustration of how false analogy arguments can also be examples of the post hoc ergo propter hoc fallacy.

An addiction to drugs or alcohol can completely ruin someone’s life. If you play too many video games and get addicted, you’re going to ruin your life too.

It may be true that addictions can be very harmful to people. It is likely also true that a physical addiction to a drug is probably different in many ways than a psychological addiction to playing video games. There is also the added complication of how these activities can play out in someone’s life.

Playing video games professionally can be very lucrative. Fortnite offered a $100 million prize pool in 2019. That doesn’t even count additional revenue streams, like sponsors and advertising. Could it be said that the child “playing too many video games” really more like the child who trains extra hard for the school’s gymnastics team?

Investing in the stock market is really no different from buying a lottery ticket or playing a slot machine at the casino. You’re just gambling your money on some random choice, hoping to hit it big.

It’s true that both buying a stock and buying a lottery ticket involve spending money with the hope of making more money. The difference is that buying a lottery ticket or playing a slot machine is purely a game of chance, and one with very poor odds at that. Investing in the stock market involves an element of risk, but it is also much more complicated and extends well beyond random chance.

Students who attend schools with expansive music programs tend to perform much higher on standardized testing. So, all we have to do to lift poorer-performing schools is introduce more music classes.

In the context of academic achievement, schools are always looking for an edge. Simply zeroing in on a single factor, like the range of music programs taught at the school, is a gross oversimplification.

Car insurance companies reward good behavior: Drivers with records free of 15-car pileups and tickets for doing 90 in a 55 pay cheaper premiums. Health insurers, on the other hand, offer people little incentive to stay out of harm’s (and doctor’s) way. But a growing number of health advocates say this is a mistake.

In a January 2013 article, MarketWatch asked if health insurance should be like car insurance. After all, both are forms of insurance. Customers want lower premiums and insurance companies want to pay out less money in claims.

While there may be some value in discussing incentive-based health insurance plans, the discussion can overlook how different human health and car repair can be. Auto insurance typically only pays out in the case of an accident, but extended health insurance can also cover “maintenance,” like medication and regular doctor visits. And, in many cases, health concerns are not the “fault” of insured patients either.

The Business of Government

Running the country is no different from running a business. It’s irresponsible to keep burying the nation in deeper and deeper debt.

Both federal governments and private companies have “balance sheets.” Money comes in and money goes out. A business pays for rent, wages and supplies, just as a government might pay for military and schools. A government collects taxes, just like how a business earns money from sales.

The overarching objective, however, is entirely different. The goal of a business is to turn a profit, but government isn’t looking for a way to make money. Whereas a business needs to concern itself with return on investment, a government may spend money where there may not be an immediate, tangible return.

It doesn’t matter if you’re writing an argumentative essay of your own or you’re analyzing someone else’s assertion. You must know how to evaluate whether an argument is sound. Familiarize yourself with the various types of logical fallacies and learn how to identify them. Then, dive deeper with examples of fallacies, like begging the question. It’s only logical.